KANSAS CITY, Mo. (AP) — A former Kansas City police detective convicted of shooting and killing a Black man in 2019 is asking that his conviction be overturned or that he be given a new trial. 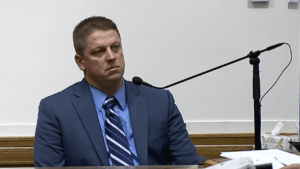 DeValkenaere, who is white, and his partner shot Lamb within seconds of arriving at a home where Lamb lived. They had followed him after reports of several traffic violations. Lamb was backing a pickup truck into a garage when he was shot.

In announcing the conviction, Youngs said the detectives violated Lamb’s constitutional rights because they had no probable cause to believe he had committed a crime, had no warrant for Lamb’s arrest and had no search warrant or consent to be on the property.

In a motion filed Oct. 27 with the Missouri Court of Appeals, DeValkenaere’s attorneys argued that DeValkenaere and his partner had probable cause to be on Lamb’s property and to arrest him for the traffic violations, The Kansas City Star reported. They also argued that police did not trespass on private property, were not the “initial aggressors” and that Lamb’s death was a lawful use of force by a police officer.

DeValkenaere testified that he shot Lamb to save his partner’s life because he believed Lamb had a firearm. Lamb’s family has said he was not armed and that a gun found at the scene was planted.

DeValkenaere was sentenced to three years for involuntary manslaughter and six years for armed criminal action, with the sentences to run consecutively. He has been allowed to remain free while his conviction is appealed.

DeValkenaere was suspended from the police force after his conviction and left the force in January. Police have not said if he was fired, resigned or retired.