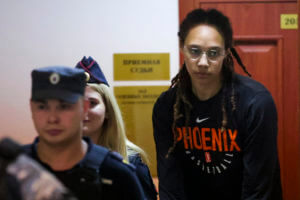 WNBA star and two-time Olympic gold medalist Brittney Griner is escorted to a courtroom for a hearing, in Khimki just outside Moscow, Russia, Wednesday, July 27, 2022. American basketball star Brittney Griner returned Wednesday to a Russian courtroom for her drawn-out trial on drug charges that could bring her 10 years in prison of convicted. (Evgenia Novozhenina/Pool Photo via AP)

Asked about the U.S. offer, Kremlin spokesman Dmitry Peskov replied that prisoner swaps were typically negotiated discreetly behind the scenes.

“We know that such issues are discussed without any such release of information,” Peskov told reporters during a conference call. “Normally, the public learns about it when the agreements are already implemented.”

He emphasized that “no agreements have been finalized” and refused to provide further details.

In a separate statement, Russian Foreign Ministry spokeswoman Maria Zakharova said that Russian and U.S. officials have conducted negotiations about possible prisoner exchanges and “there has been no concrete result yet.”

“We proceed from the assumption that interests of both parties should be taken into account during the negotiations,” Zakharova said.

Blinken’s comments marked the first time the U.S. government publicly revealed any concrete action it has taken to secure Griner’s release. The two-time Olympic gold medalist and player for the WNBA’s Phoenix Mercury was arrested at a Moscow airport in mid-February when inspectors found vape cartridges containing cannabis oil in her luggage.

In a sharp reversal of previous policy, Blinken said he expects to speak with Russian Foreign Minister Sergey Lavrov to discuss the proposed prisoner deal and other matters. It would be their first phone call since before Russia sent its troops into Ukraine. 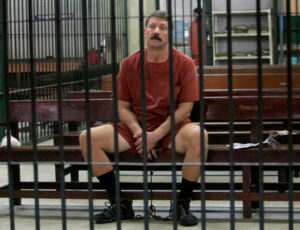 FILE – Viktor Bout sits while waiting for his verdict at the detention room at a criminal court in Bangkok, Thailand, Tuesday, Aug. 11, 2009. The Russian arms dealer who once inspired a Hollywood movie is back in the headlines with speculation around a return to Moscow in a prisoner exchange for U.S. WBNA star Brittney Griner and former U.S. Marine Paul Whelan. (AP Photo/Apichart Weerawong)

Russia has for years expressed interest in the release of Bout, a Russian arms dealer once labeled the “Merchant of Death.” He was sentenced to 25 years in prison in 2012 on charges that he schemed to illegally sell millions of dollars in weapons.

Griner’s trial on drug charges started in a court outside Moscow this month, and she testified Wednesday that she didn’t know how the cartridges ended up in her bag but that she had a doctor’s recommendation to use cannabis to treat career-related pain.

The 31-year-old has pleaded guilty but said she had no criminal intent in bringing the cartridges to Russia and packed in haste for her return to play in a Russian basketball league during the WNBA’s offseason. She faces up to 10 years in prison if convicted of transporting drugs.

On Wednesday, Griner testified that a language interpreter translated only a fraction of what was being said while she was detained at Moscow’s airport and that officials told her to sign documents, but “no one explained any of it to me.”

Griner also said that besides the poor translation, she received no explanation of her rights or access to a lawyer during the initial hours of her detention. She said she used a translation app on her phone to communicate with a customs officer.

Her arrest came at a time of heightened tensions between Moscow and Washington ahead of Russia sending troops into Ukraine on Feb. 24. Griner’s five months of detention have raised strong criticism among teammates and supporters in the United States.

The Biden administration has faced political pressure to free Griner and other Americans whom the U.S. has declared to be “wrongfully detained” — a designation sharply rejected by Russian officials. 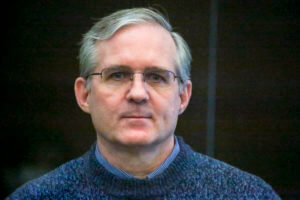 FILE – Paul Whelan, a former U.S. marine who was arrested for alleged spying, listens to the verdict in a courtroom at the Moscow City Court in Moscow, Russia, June 15, 2020. (Sofia Sandurskaya, Moscow News Agency photo via AP, File)

Whelan, a corporate security executive from Michigan, was sentenced to 16 years in prison on espionage charges in 2020. He and his family have vigorously asserted his innocence. The U.S. government has denounced the charges as false.

Washington has long resisted prisoner swaps out of concern that they could encourage additional hostage-taking and promote false equivalency between a wrongfully detained American and a foreign national regarded as justly convicted.

Matthew Lee and Eric Tucker in Washington contributed to this report.