LITTLE ROCK, Ark. (AP) — The nation’s first trial over a state’s ban on gender-confirming care for children began in Arkansas on Monday, the latest fight over restrictions on transgender youths championed by Republican leaders and widely condemned by medical experts.

U.S. District Judge Jay Moody is hearing evidence and testimony over the law he temporarily blocked last year that would prohibit doctors from providing gender-confirming hormone treatment, puberty blockers or surgery to anyone under 18 years old. It also prevents doctors from referring patients elsewhere for such care. 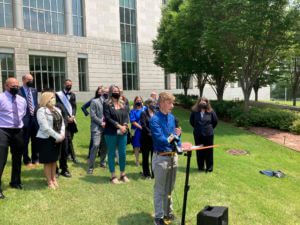 FILE – Dylan Brandt speaks at a news conference outside the federal courthouse in Little Rock, Ark., July 21, 2021. Brandt, a teenager, is among several transgender youth and families who are plaintiffs challenging a state law banning gender confirming care for trans minors. The nation’s first trial over a state’s ban on gender-confirming care for children begins in Arkansas on Monday, Oct. 17, 2022, the latest fight over restrictions on transgender youth championed by Republican leaders and widely condemned by medical experts. (AP Photo/Andrew DeMillo, File)

If the law takes effect, doctors who violate the ban could lose their licenses or face other professional disciplinary measures and could be sued.

The families of four transgender youths and two doctors who provide gender-confirming care want Moody to strike down the law, saying it is unconstitutional because it discriminates against transgender youths, intrudes on parents’ rights to make medical decisions for their children, and infringes on doctors’ free speech rights. The trial is expected to last at least a week.

“As a parent, I never imagined I’d have to fight for my daughter to be able to receive medically necessary health care her doctor says she needs and we know she needs,” said Lacey Jennen, whose 17-year-old daughter has been receiving gender-confirming care.

Arkansas was the first state to enact such a ban on gender-confirming care, with Republican lawmakers in 2021 overriding GOP Gov. Asa Hutchinson’s veto of the legislation. Hutchinson, who had signed other restrictions on transgender youths into law, said the prohibition went too far by cutting off the care for those currently receiving it.

Multiple medical groups, including the American Medical Association and the American Academy of Pediatrics, oppose the bans and experts say the treatments are safe if properly administered.

Dr. Dan Karasic, a psychiatrist called by plaintiffs to testify Monday, rejected many of the criticisms that experts for the state are expected to make about gender-confirming care. They include claims that doctors are providing such care on demand without any assessments and without talking with families about the potential risks. 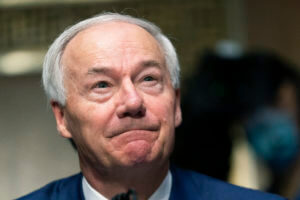 FILE – Arkansas Gov. Asa Hutchinson testifies before a Senate Judiciary Committee hearing on Capitol Hill, June 22, 2021, in Washington. The nation’s first trial over a state’s ban on gender-confirming care for children begins in Arkansas on Monday, Oct, 17, 2022. Arkansas was the first state to enact such a ban on gender-confirming care, with Republican lawmakers in 2021 overriding Hutchinson’s veto of the legislation. (AP Photo/Manuel Balce Ceneta, File)

Karasic, who has treated thousands of people for gender dysphoria, said those actions would violate the standard of care for such treatments and aren’t consistent with what he has seen from other doctors in the field.

Karasic said the possibility of irresponsible providers isn’t a reason for banning the care for transgender youths.

“There certainly are bad cardiologists, but if I have chest pain, I’d still like to be able to get care,” he said.

But advocates of the law have argued the prohibition is within the state’s authority to regulate medical practices.

“This is about protecting children,” Republican Attorney General Leslie Rutledge said. “Nothing about this law prohibits someone after the age of 18 from making this decision. What we’re doing in Arkansas is protecting children from life-altering, permanent decisions.”

A similar law has been blocked by a federal judge in Alabama, and a Texas judge has blocked that state’s efforts to investigate gender-confirming care for minors as child abuse. Children’s hospitals around the country have faced harassment and threats of violence for providing gender-confirming care.

“This latest wave of anti-trans fever that is now spreading to other states started in Arkansas, and it needs to end in Arkansas,” said Holly Dickson, executive director of the American Civil Liberties Union of Arkansas, which filed the lawsuit on behalf of the families.

A three-judge panel of the 8th U.S. Circuit Court of Appeals in August upheld Moody’s preliminary injunction blocking the ban’s enforcement. But the state has asked the full 8th Circuit appeals court to review the case.