Jesani Carter, 20, and Jordan Ruby, 18, faced a Las Vegas judge for the second time after the two were arrested for several robberies and shootings around town at the end of 2021. 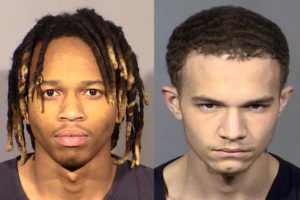 The state had three witnesses each from the different crime scenes. They identified the temporary tag on the vehicle in question and the gun matched the casing found at the second crime scene, according to court records.

Their clothing also matched two of the three crime scenes and an encounter earlier when they were pulled over before.

Additionally, court records report the state played a video of the crimes for the judge and the defense. In the end, the judge denied bail for Carter and Ruby on Monday.

The two are facing charges after several shootings and attempted robberies in local parking garages on Dec. 31, 2021.

The incidents included one at the Fashion Show Mall where a woman was killed, another where an employee was shot at on Las Vegas Boulevard and where a person was shot and killed inside the parking garage at the Palace Station hotel-casino.

Carter and Ruby are scheduled for another court date on Feb. 10.

This story was originally published January 10, 2022, by KTNV in Las Vegas, an E.W. Scripps Company.