COLUMBUS, Ohio (AP) — Columbus police came under criticism Thursday for the killing of a man who was lying on his bed when an officer attempting to serve warrants fatally shot him, as a lawyer representing the slain man’s family demanded immediate changes to policing in the city and promised a lawsuit. 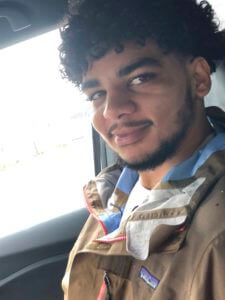 This undated family photo shows Donovan Lewis, who was fatally shot by Columbus police on Tuesday, Aug. 30, 2022, as police were attempting to arrest Lewis on multiple warrants. Police Chief Elaine Bryant has said Lewis appeared to be holding a vape pen when he was shot. An attorney representing Lewis’ family has called the shooting utterly senseless and demanded new police reforms. (Family of Donovan Lewis via AP)

“How many more lives are going to be lost to this type of reckless activity? How many more young Black lives will be lost?” Elliott said at a press event attended by multiple members of Lewis’ family.

“How many more families like Donovan’s will need to appear at news conferences like this one before our leaders do enough to put a stop to these barbaric killings?” Elliott said.

The U.S. Justice Department agreed in 2021 to review Columbus police department practices after a series of fatal police shootings of Black people — including the April 2021 killing of 16-year-old Ma’Khia Bryant — and the city’s response to 2020 racial injustice protests.

In addition, a three-year police contract approved last year provided $200,000 buyouts for up to 100 officers with at least 25 years of experience, with a goal of clearing the decks of employees who might not be on board with the department’s new direction.

“If you’re going to police in the city of Columbus, you have to buy into the vision and leadership of Chief Bryant around change and reform,” Columbus Mayor Andrew Ginther said at the time.

The city also approved a first-ever civilian review board. Elliott acknowledged these actions, but said it’s not enough.

Elliott questioned on Thursday the speed of the shooting, which appears in bodycam footage to happen within a second or less of Officer Ricky Anderson opening the door to a bedroom where Lewis slept. Elliott made the point in criticizing suggestions by the police chief that Lewis had something in his hand when he was shot. No weapon was found.

“There is absolutely no way in the timeframe between when the door was opened and the gun was fired that Officer Anderson perceived a potential gun in his hand, got through to his brain, and then reacted by shooting his weapon,” Elliott said. 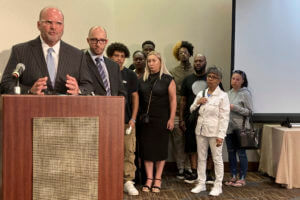 Attorney Rex Elliott addresses reporters with the extended family of Donovan Lewis behind him, on Thursday, Sept. 1, 2022, in Columbus. Ohio. Elliott said the early Tuesday morning shooting death of Lewis at the hands of police was senseless and reckless and he called for immediate new police reforms. (AP Photo/Andrew Welsh-Huggins)

Lewis, 20, died at a hospital following the shooting early Tuesday morning. Columbus police say officers had gone to the apartment around 2 a.m. to arrest Lewis on multiple warrants including domestic violence, assault and felony improper handling of a firearm. Lewis was Black and the officers were white.

Police bodycam footage shows Anderson opening a bedroom door in an apartment and in a second or less shooting Lewis, who was in bed. Columbus Police Chief Elaine Bryant has said Lewis appeared to be holding a vape pen before he was shot, a notion disputed by Elliott.

Bryant has not addressed whether police believed the device was a weapon, a determination that will come during the probe by the Ohio Bureau of Criminal Investigation. Anderson has been placed on leave under city procedure.

In the bodycam footage, Anderson is seen after the shooting raising a hand in demonstration to another officer and saying Lewis lifted his hand “like this.”

Elliott disputed this version of events, saying it’s unclear from the bodycam footage if Lewis was holding anything. He said Anderson shot well before he could have perceived a threat.

The investigation must look at “the totality of the circumstances,” Mark Collins, an attorney representing Anderson, said Thursday.

In such cases, “we are expressly forbidden from using 20/20 hindsight, because unlike all of us, officers are not afforded the luxury of armchair reflection when they are faced with rapidly evolving, volatile encounters in dangerous situations,” Collins said.

In his remarks, Elliott also questioned the need for an early-morning operation. “The reality is that felony warrants are executed every day in daylight hours,” he said.

Bryant has said the city is committed to holding officers responsible if there was any wrongdoing but the state investigation needs to play out.

Ginther, who hired Bryant last year, has said that “regardless of the circumstances, a mother has lost her son in the city of Columbus.”

Elliott said he plans a civil lawsuit in the future against Anderson and the city.

In May 2021, Columbus reached a $10 million settlement with the family of Andre Hill, shot and killed in December 2020 as he emerged from a garage holding his cellphone. Officer Adam Coy has pleaded not guilty to murder charges and is set for trial in November.

In December, the city agreed to pay $5.75 million to people injured during the 2020 racial injustice and police brutality protests.