Lawyers who secured a $1.1 billion settlement in the deadly collapse last year of a beachfront Florida condominium building were awarded more than $70 million in fees Monday by a judge.

The total was less than the approximately $100 million attorneys with the 17 law firms had requested, but there were no guarantees initially they would ever be paid in the days after the Champlain Towers South building fell June 24, 2021, killing 98 people. 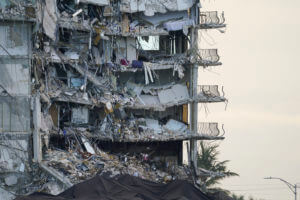 FILE – A giant tarp, bottom, covers a section of rubble where search and rescue personnel have been working at the Champlain Towers South condo building in Surfside, Fla., on July 4, 2021. Lawyers who secured a $1.1 billion settlement in the deadly collapse last year of the beachfront Florida condominium building were awarded more than $70 million in fees Monday, Aug. 29, 2022 by a judge. (AP Photo/Lynne Sladky, File)

Miami-Dade Circuit Judge Michael Hanzman said surviving family members and people who only lost units and property got far more in compensation than is typical in such large class-action cases — and this lawsuit was settled in only a year’s time.

“That is a remarkable result. It is unprecedented,” Hanzman said at a hearing. “They are not getting a meager recovery here. They are in essence being made whole, which never happens in these cases.” Hanzman also remarked that the case “could have been an absolute disaster.”

“It had so much potential to go off the rails,” the judge said. “If things had not turned out well, they (attorneys) would have walked away with nothing.”

Still, the judge said the full $100 million in legal fees requested was too much. He noted not only that lawyers were not promised a dime initially when they took the Champlain Towers case but also that their swift settlement meant a reduction in the hours involved.

Some survivors also questioned the higher amount as too generous given the scope of the tragedy, even as they acknowledged the extraordinary outcome.

“No one should be profiting from the death of 98 humans,” said Marin Langerfeld, who lost his sister and her husband in the collapse.

“This is the most difficult thing that has happened to our family’s lives,” added Kevin Spiegel, whose wife Judith died. “We will always carry this around.”

The settlement money comes from 37 sources, including insurance companies, engineering firms and a luxury condominium building whose recent construction next door is suspected of contributing to structural damage of Champlain Towers South. None of the parties admit any wrongdoing.

A billionaire developer from Dubai purchased the 1.8-acre (1-hectare) beachside site for $120 million, contributing to the settlement. It’s not clear yet what structure will rise on the site.

Hearings before Hanzman and a second judge on the wrongful-death claims have taken place over the past five weeks. Michael Goldberg, the court-appointed receiver overseeing the case, said checks should be distributed to those families who lost loved ones beginning in mid-September. Those who lost only property will receive the full assessed value for their units, with taxes and other costs forgiven.

One of the plaintiffs’ lead lawyers, Harley Tropin, said the $100 million was the absolute ceiling for attorney fees and that the group was satisfied with whatever was awarded.

“It was an honor to be chosen to try to get a result on behalf of these victims. There’s no victory lap here,” Tropin said. “The victims come first. We’re good.”

Champlain Towers South had a history of maintenance problems, and questions have been raised about the quality of its original construction and inspections in the early 1980s. Other possible factors in the collapse are sea level rise caused by climate change, which could cause damage from saltwater intrusion.

A final conclusion on the cause is likely years away. The National Institute of Standards and Technology is overseeing the investigation.