SAN DIEGO (AP) — No one disputes that the Navy shares blame for the loss of the USS Bonhomme Richard, the $1.2 billion amphibious assault ship that was consumed by flames in San Diego in July 2020 as officers failed to respond quickly and its crew struggled with broken equipment.

But none of that would not have happened, according to prosecution closing arguments Thursday, without Ryan Sawyer Mays. 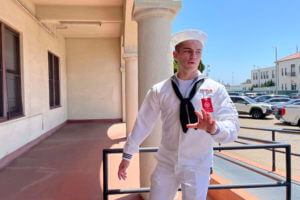 US Navy sailor Ryan Sawyer Mays walks past reporters at Naval Base San Diego before entering a Navy courtroom Wednesday, Aug. 17, 2022, in San Diego. Mays is accused of setting the USS Bonhomme Richard on fire, and his court martial is scheduled to begin Monday, Sept. 19, 2022. The July 2020 blaze damaged the billion-dollar warship so badly it had to be scuttled and marked one of the worst noncombat US warship disasters in recent memory. (AP Photo/Julie Watson)

Prosecutors say the young sailor was angry and vengeful about failing to become a Navy SEAL and being assigned to deck duty, so he ignited the ship to send a message.

Defense lawyers said in their closing statements that the Navy was determined to pin the worst noncombat Navy disaster in recent memory on someone — and the sailor they picked, Mays, might be the wrong guy who now is facing a possible life sentence. There is no physical evidence tying the fire to Mays.

It’s now up to the lone Navy judge, who presided over the nine-day trial at Naval Base San Diego, to decide.

Mays, who was charged with arson and the willful hazarding of a ship, says he’s innocent.

The prosecution says Mays ignited cardboard boxes early that Sunday morning in a lower vehicle storage area on the vessel — which was docked while undergoing $250 million in maintenance work — to drive home his text earlier to his division officer that the ship was so cluttered with contractors’ stuff it was “hazardous as (expletive).”

The prosecutor, Capt. Jason Jones, acknowledged in court a Navy report last year that concluded that the inferno was preventable and unacceptable, and that there were lapses in training, coordination, communications, fire preparedness, equipment maintenance and overall command and control. The failure to extinguish or contain the fire led to temperatures exceeding 1,200 degrees (649 Celsius) in some areas, melting sections of the ship into molten metal that flowed into other parts of the ship. 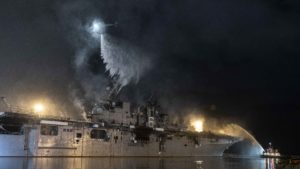 FILE – In this July 14, 2020, file photo, a helicopter from Helicopter Sea Combat Squadron (HSC) 3 combats a fire aboard the amphibious assault ship USS Bonhomme Richard (LHD 6) at Naval Base San Diego. A sailor charged with starting the fire that destroyed USS Bonhomme Richard had been assigned to the ship’s crew after dropping out of Navy SEAL training, according to a newly unsealed court document. The details about 20-year-old Ryan Mays and the investigation into the worst U.S. warship fire in recent memory were revealed in a search warrant unsealed Tuesday, Aug. 3, 2021, in U.S. District Court in San Diego. (Mass Communications Specialist 3rd Class Garrett LaBarge/U.S. Navy via AP, File)

Jones told the judge there is no doubt the Navy “loses the ship” that morning, but Mays is to blame for igniting it.

“That sucker punch from behind, that’s what the Navy could have never prevented,” he said.

Defense lawyers say the trial only exposed a shoddy probe by government investigators who rushed to judgement and failed to collect evidence showing that the culprit also could have been lithium ion batteries or a sparking forklift instead of arson. The investigators took no notes, no photos of either of those other potential causes, they say.

“Seaman Mays pointed out that there were fire hazards on this ship, and now he’s facing a court-martial for arson,” Lt. Cmdr. Jordi Torres, the lead defense attorney, said.

Torres said the Navy case hinges on the testimony of one sailor, Seaman Kenji Velasco, who has changed his account over time.

The day of the fire, Velasco told no one that he saw anyone go down below, even in case a fellow shipmate’s life might be in danger with the blaze roaring up from the ship’s belly at the time, the defense pointed out.

It wasn’t until days later that he told investigators he saw someone he didn’t recognize in coveralls and carrying a bucket go to the area. Then he said he thought it was Mays and he heard him say sarcastically “I love deck.” Then he later said he was “100 percent” sure it was Mays.

Meanwhile, investigators discounted another sailor’s account, Torres said. She testified at the trial that she saw another shipmate run out of the lower vehicle storage area that morning after the fire started, the defense said.

According to the defense, that sailor was also disgruntled and had Googled information about heat scales related to fires. A military handwriting examiner also matched the sailor’s script to graffiti on a port-a-potty wall that read: “I did it. I set the ship on fire,” with a drawing of a ship in flames.

Prosecutors said he showed proof he researched that for a novel he was writing about a dragon, and they say cellphone tracking and other evidence showed he was off the ship before the fire started.

The prosecution also said investigators found no scientific data to back the theory that batteries or a forklift malfunction sparked the inferno, while testimony from fellow shipmates bolstered the case against Mays along with his own words when he was being escorted in handcuffs and blurted out, according to the sailor escorting him to the brig: “It had to be done. I did it.”

The defense said Mays, known for being flippant, was being sarcastic after denying doing it more than 150 times during 10 hours of questioning by investigators.