PARIS (AP) — The lone survivor of a team of Islamic State extremists who terrorized Paris in 2015 was convicted Wednesday of murder and other charges and sentenced to life in prison without parole for the deadliest peacetime attacks in French history. 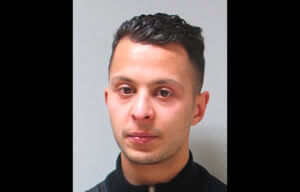 FILE – This undated image made available by Belgium Federal Police shows Salah Abdeslam, the leading suspect and the only surviving member of the nine-member attacking team that terrorized Paris, in Paris on Nov. 13, 2015. The historic trial in Paris of 20 men suspected of critical roles in the Islamic State massacres that killed 130 people in 2015 has ended this week with verdicts against the defendants in France’s worst peacetime attack expected on Wednesday June 29. (Belgium Federal Police via AP, File)

The special terrorism court also convicted 19 other men involved in the assault on the Bataclan concert hall, cafes and the national stadium, which killed 130 people and injured hundreds, some permanently maimed. It also led to intensified French military action against extremists abroad and a lasting shift in France’s security posture at home.

Survivors and victims’ families emerged from the packed courtroom dazed or exhausted after an excruciating nine-month trial that’s been crucial in their quest for justice and closure.

Chief suspect Salah Abdeslam was found guilty of murder and attempted murder in relation to a terrorist enterprise. The court found that his explosives vest malfunctioned, dismissing his argument that he ditched the vest because he decided not to follow through with his part of the attack on the night of Nov. 13, 2015.

The other nine attackers either blew themselves up or were killed by police that night.

Abdeslam, a 32-year-old Belgian, was given France’s most severe sentence possible. The sentence of life without parole has only been pronounced four times in the country — for crimes related to rape and murder of minors. Neither he nor his lawyer spoke publicly after the verdict.

Of the other defendants, 18 were given various terrorism-related convictions, and one was convicted on a lesser fraud charge. Some were given life sentences; others walked free after being sentenced to time served. 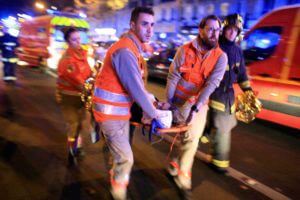 FILE – A woman is evacuated from the Bataclan concert hall after a shooting on Nov. 13, 2015 in Paris. The historic trial in Paris of 20 men suspected of critical roles in the Islamic State massacres that killed 130 people in 2015 has ended this week with verdicts against the defendants in France’s worst peacetime attack expected on Wednesday June 29. (AP Photo/Thibault Camus, File)

They have 10 days to appeal. The sentences were broadly expected, and those present expressed little surprise; mainly, a bit of relief.

“I hope to be able to put the word ‘victim’ into the past,” said Bataclan survivor Arthur Denouveaux.

“When things like this happen you have no reparation possible. That’s why you have justice,” he said, even if “justice can’t do everything.”

During the trial, Abdeslam initially proclaimed his radicalism but later appeared to evolve, weeping, apologizing to victims and pleading with judges to forgive his “mistakes.”

For months, the packed main chamber and 12 overflow rooms in the 13th century Justice Palace heard harrowing accounts by the victims, along with testimony from Abdeslam. The other defendants were largely accused of helping with logistics or transportation. At least one is accused of a direct role in the deadly March 2016 attacks in Brussels, which also was claimed by the Islamic State group.

The trial was an opportunity for survivors and those mourning loved ones to recount the deeply personal horrors inflicted that night and to listen to details of countless acts of bravery, humanity and compassion among strangers. They wanted to tell the accused directly that they have been left irreparably scarred, but not broken. 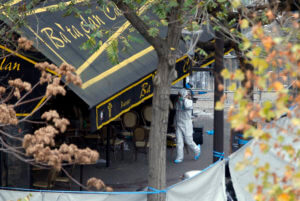 FILE – An investigator works outside the Bataclan concert hall, Nov. 14, 2015 in Paris. The historic trial in Paris of 20 men suspected of critical roles in the Islamic State massacres that killed 130 people in 2015 has ended this week with verdicts against the defendants in France’s worst peacetime attack expected on Wednesday June 29. (AP Photo/Christophe Ena, File)

“I feel like I’ve grown up” thanks to the trial, said David Fritz Geoppinger, who was held hostage in the Bataclan. “It’s important as a victim to hear justice speak.”

France was changed in the wake of the attacks: Authorities declared a state of emergency and armed officers now constantly patrol public spaces. The violence sparked soul-searching among the French and Europeans, since most of the attackers were born and raised in France or Belgium. And they transformed forever the lives of all those who suffered losses or bore witness.

Presiding judge Jean-Louis Peries said at the trial’s outset that it belongs to “international and national events of this century. ” France emerged from the state of emergency in 2017, after incorporating many of the harshest measures into law.

Fourteen of the defendants were in court, including Abdeslam. All but one of the six men convicted in absentia are presumed killed in Syria or Iraq; the other is in prison in Turkey.

Most of the suspects were accused of helping create false identities, transporting the attackers back to Europe from Syria or providing them with money, phones, explosives or weapons. Abdeslam was the only defendant tried on several counts of murder and kidnapping as a member of a terrorist organization. 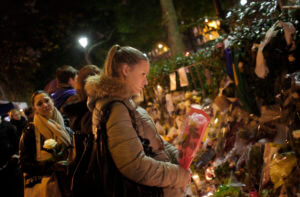 FILE – A woman pays respect to the victims, outside the Bataclan concert hall, which was a site of last Friday’s attacks, in Paris, Nov. 17, 2015. The historic trial in Paris of 20 men suspected of critical roles in the Islamic State massacres that killed 130 people in 2015 has ended this week with verdicts against the defendants in France’s worst peacetime attack expected on Wednesday June 29. (AP Photo/Christophe Ena, File)

“Not everyone is a jihadi, but all of those you are judging accepted to take part in a terrorist group, either by conviction, cowardliness or greed,” prosecutor Nicolas Braconnay told the court in closing arguments this month.

Some defendants said innocent civilians were targeted because of France’s policies in the Middle East and hundreds of civilian deaths in Western airstrikes in Islamic State-controlled areas of Syria and Iraq.

During his testimony, former President François Hollande dismissed claims that his government was at fault. The Paris attackers did not shoot, kill, maim and traumatize civilians because of religion, he said, but “fanaticism and barbarism.”

The night of the attack was a balmy Friday evening, with the city’s bars and restaurants packed. At the Bataclan concert venue, the American band Eagles of Death Metal were playing to a full house. At the national stadium, a soccer match between France and Germany had just begun, attended by then-President Hollande and then-Chancellor Angela Merkel.

The sound of the first suicide bombing at 9:16 p.m. barely carried over the noise of the stadium’s crowd. The second came four minutes later. A squad of gunmen opened fire at several bars and restaurants in another part of Paris.

Worse was to follow. At 9:47 p.m., three more gunmen burst into the Bataclan, firing indiscriminately. Ninety people died within minutes. Hundreds were held hostage – some gravely injured – for hours before Hollande ordered it stormed.

During closing arguments Monday, Abdeslam’s lawyer Olivia Ronen told a panel of judges that her client shouldn’t be convicted of murder because he was the only one in the group of attackers who didn’t set off explosives to kill others that night.

She emphasized through the trial that she is “not providing legitimacy to the attacks” by defending her client in court.

Abdeslam apologized to the victims at his final court appearance Monday, saying that listening to victims’ accounts of “so much suffering” changed him, he said.

Georges Salines, who lost his daughter Lola in the Bataclan, felt Abdeslam’s remorse was insincere. “I don’t think it’s possible to forgive him,” he said.

But for Salines, life without parole is going too far.

“I don’t like the idea of in advance deciding that there is no hope,” he said. “I think it is important to keep hope for any man.” 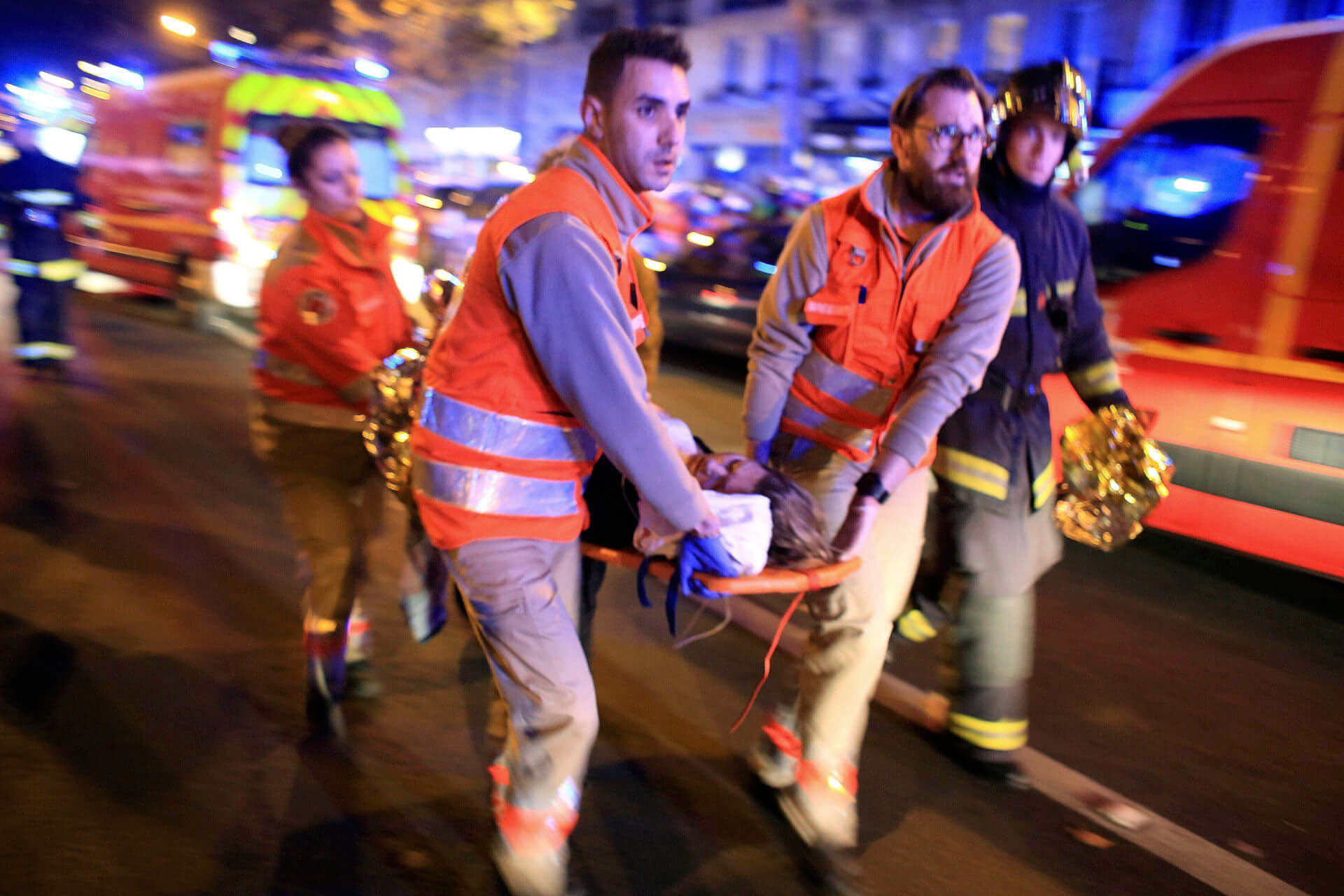 FILE - A woman is evacuated from the Bataclan concert hall after a shooting on Nov. 13, 2015 in Paris. The historic trial in Paris of 20 men suspected of critical roles in the Islamic State massacres that killed 130 people in 2015 has ended this week with verdicts against the defendants in France's worst peacetime attack expected on Wednesday June 29. (AP Photo/Thibault Camus, File)
MORE NEWS