MANSFIELD, La. (AP) — A Louisiana man who showed no remorse during his trial for killing a motel desk clerk and attempting to kill a motel guest continued that defiance during his sentencing last week. 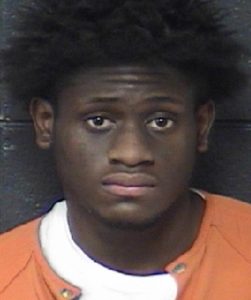 She sentenced Terry Dewayne Powell, 20, of Mansfield, to life in prison plus 50 years for the slaying of Lynda Palmer, 75, of Mansfield, on April 12, 2021, KTBS-TV reported.

Powell killed Palmer after stealing cash as she worked the night desk at Best Western Plus DeSoto Inn & Suites in Mansfield, authorities said. He also shot a motel guest and tried to rob him.

Rascoe said she relives daily the phone call informing her that her mother had been killed. Palmer, she said, was not just a mother and grandmother, but her best friend. She said Palmer continued to work because she loved people.

“She had many more years to live,” Rascoe said. “She was stolen from us for no reason.”

Heather Palmer described her mother as beautiful with a contagious laugh who had a “heart bigger than the entire planet.”

Both she and her sister asked the judge to give Powell the maximum sentence, saying he shouldn’t “feel joy, sunshine or happiness ever again.”

Matheny shared how Palmer and her husband Joe raised him as one of their own.

“Without her, I wouldn’t be the person I am today,” Matheny said. “No one understands what it’s like to have your mother taken in this way.”

As McCartney prepared to impose sentence, Powell made inaudible statements. The judge admonished him to stop talking, but Powell wouldn’t, so she ordered him removed from the courtroom.

As bailiffs rushed him out of the room, Powell looked to Palmer’s family, grinned and blew kisses.

McCartney took a break before Powell was brought back into the courtroom on the opposite side from the victim’s family. She told Powell his behavior was “derogatory” and “unacceptable” and said, “If you can’t stand silent, we will silence you.”

A roll of duct tape was on the bailiff’s desk.

Those sentences are to run concurrent with each other. But since McCartney said she considered the crimes against both victims as separate offenses, she ordered the sentences to run consecutively, which gave Powell the overall sentence of life, plus 50 years.