BUFFALO, Minn. (AP) — A man accused in a shooting attack on a Minnesota medical clinic that killed one staff member and wounded four others last year refused to look at the survivors Tuesday as they described their pain and terror.

Gregory Ulrich is being tried on charges of murder, attempted murder and other counts in the Feb. 9, 2021, shooting at the Allina Health Clinic in Buffalo, a small city about 40 miles (65 kilometers) northwest of Minneapolis. 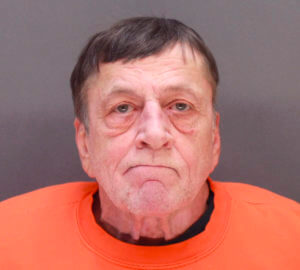 FILE – This booking photo released by the Wright County, Minn., Sheriff’s Office shows Gregory Paul Ulrich. Jury selection is underway Tuesday, May 17, 2022, in the trial of Ulrich, a man accused of walking into a Minnesota medical clinic and opening fire, killing one staff member and wounding four others last year. Ulrich is being tried on charges of murder. (Wright County Sheriff’s Office via AP, File)

Ulrich sat attentively at the table with his lawyers through the first two weeks of trial. This time he laid his head on a courtroom table and wrapped his arms around it as victims took the stand. He didn’t look up through two hours of testimony, the Star Tribune reported.

Before the jury was brought in, Ulrich told Wright County District Judge Catherine McPherson that he was in great pain and would prefer to lie down outside the courtroom.’

“Pain is the most powerful drug. I might as well be on heroin. I’m all mixed up and I need some pain medication so I can talk and think about it,” Ulrich said.

Gibson said she heard “a loud metallic bang” around 10:55 that morning and looked down the hallway to see a man with a gun. She heard more bangs and ran outside, where she lay on the ground, bleeding from a gunshot wound in her thigh, and played dead in temperatures around 5 below zero.

Antonya Fransen-Pruden, a registered nurse, walked to the witness stand with a slight limp, a lingering effect of being shot in the back during the attack. She was in the lobby when she and a coworker were shot.

As she dragged herself under a desk, she heard the gunman call 911 and tell the dispatcher to “send a lot of ambulances. There are a lot of spinal injuries and I have bombs that are about to go off.”

Fransen-Pruden spent 10 days in the hospital being treated for injuries to her spine, colon, ovaries and Fallopian tubes. She still has a bullet in her pelvis.

Prosecutors say Ulrich was angry about his medical treatment at the clinic. Court records allege Ulrich has mental health and substance abuse problems.

After the two victims testified, prosecutors played two short videos made by Ulrich in December 2020, about six weeks before the attack.

“They’re gonna find out what happens” when they mess with “a good Christian man,” Ulrich said in one of the videos. “You picked on the wrong person.”