By Drew Scofield and Kaylyn Hlavaty

CLEVELAND (WEWS) — A 32-year-old father has been indicted on multiple charges in connection with his son’s death.

Matthew J. Ponomarenko is accused of beating 5-year-old Jax Ponomarenko to death with a baseball bat on March 25. In a 911 call, he reportedly told a dispatcher that he was “hearing voices” and killed his son. 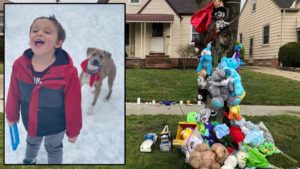 A medical examiner listed Jax’s cause of death as “blunt impacts of head with skull and brain injuries.”

According to Cuyahoga County Court of Common Pleas records, Ponomarenko is charged with two counts of aggravated murder, both unspecified felonies, and two counts of endangering children, both second-degree felonies. He was indicted by a grand jury on July 27.

Ponomarenko has a pretrial conference scheduled for Aug. 5.