COLLEGE PARK, Md. (AP) — A Pennsylvania man was arrested Wednesday on charges that he assaulted an Associated Press photographer and police officers during the Jan. 6 riot at the U.S. Capitol. 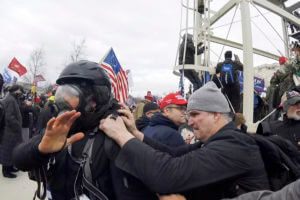 Alan William Byerly, 54, was armed with what appeared to be a stun gun when he charged at officers guarding the Capitol, an FBI agent wrote in an affidavit. After police apparently removed the device from his hand, Byerly continued to charge at the officers, punching or pushing at least three of them, and tried to grab an officer’s baton, the agent wrote.

Officers managed to restrain Byerly, but a fellow rioter helped him escape, the FBI said. Police recovered the stun gun that he apparently wielded.

Byerly also is accused of attacking an AP photographer who was wearing a helmet-style gas mask and a lanyard with Associated Press lettering.

A photo shows Byerly standing behind a group of people who pulled the photographer backward down a set of stairs leading up to the western front of the Capitol building, the affidavit says. At the bottom of the stairs, Byerly and three other people grabbed the photographer and pushed, shoved and dragged him toward the site of the original altercation, the agent wrote.

A federal magistrate in Allentown, Pennsylvania, ordered Byerly to be jailed pending a detention hearing on Monday. Court records don’t list a defense attorney for him.

The charges against Byerly in a June 25 complaint include assaulting a federal officer, obstruction of law enforcement during civil disorder and violent entry and disorderly conduct on Capitol grounds.

The AP reported last week that the fence erected around the Capitol after the insurrection is expected to be removed as early as Friday, weather permitting. The U.S. Capitol Police said the temporary fencing can be reinstalled quickly, if necessary. Building restrictions remain in effect. 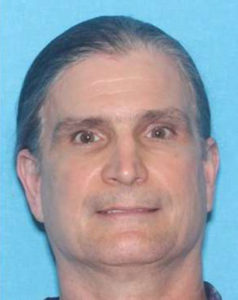 Law enforcement officials have been particularly concerned about the potential for violence from right-wing extremist groups and those who believe in conspiracies and follow election-related information online. Officials have been tracking chatter online about groups of people potentially returning to Washington as part of an unfounded and baseless conspiracy theory that former President Donald Trump would be reinstated in August, two officials familiar with the matter told the AP.

An Illinois man arrested on June 24 was the first defendant charged with assaulting a member of the news media during the riot, according to the Justice Department. Shane Jason Woods, 43, is accused of tackling a cameraman, causing him to fall and drop his camera, according to an FBI agent’s affidavit.

Footage of the riot showed Byerly wearing a gray “Kutztown” beanie, a neon yellow “safety” long-sleeve shirt under a black jacket, a striped face covering and a black backpack. Byerly lives in Fleetwood, Pennsylvania, which is roughly 5 miles (8 kilometers) from the city of Kutztown, the affidavit says,

A tipster who called the FBI in April identified Byerly as one of the suspects captured in riot photos. The caller said Byerly frequents a Fleetwood business where the caller works. Byerly told a friend that he was waiting to be arrested because he knew that his picture had been publicized, the caller said.

Cellphone records showed that Byerly’s phone was in Washington, D.C., on Jan. 6, the FBI said.
___
Associated Press writers Lisa Mascaro and Michael Balsamo in Washington contributed to this report.