A Virginia man who is facing trial on charges that he drove a Hummer packed with guns to Philadelphia to interfere with the 2020 presidential election has been arrested in a separate case that alleges his involvement in the Jan. 6 insurrection at the U.S. Capitol.

Antonio LaMotta was arrested Tuesday in the southeastern Virginia city of Chesapeake, according to court documents filed in U.S. District Court in Washington. 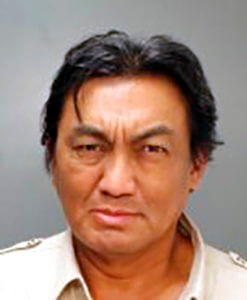 FILE – This image provided by the Philadelphia Police Department shows Antonio LaMotta, who is facing trial on charges that he drove a Hummer containing guns to Philadelphia to interfere with the 2020 presidential election. LaMotta has been arrested in a separate case that alleges his involvement in the Jan. 6 insurrection. He was arrested Tuesday, Aug. 16, 2022, in the southeastern Virginia city of Chesapeake, according to court documents filed in U.S. District Court in Washington. (Philadelphia Police Department via AP)

He faces federal misdemeanor offenses, including illegal entry and disorderly conduct at the U.S. Capitol in January 2021. Lawmakers had gathered that day to count Electoral College results, which showed that President Joe Biden won the election.

LaMotta, 63, is among more than 850 people charged with federal crimes for their alleged conduct inside the Capitol building. But he stands out for the case already pending against him and another man in Philadelphia.

In November 2020, LaMotta and Joshua Macias drove to a Philadelphia convention center where votes were being counted for the presidential election, prosecutors have alleged. The men arrived in a Hummer adorned with a QAnon sticker and loaded with an AR-15-style rifle, more than 100 rounds of ammunition and other weapons.

QAnon centers on the baseless belief that former President Donald Trump had waged a secret campaign against enemies in the “deep state” and a child sex trafficking ring run by satanic pedophiles and cannibals.

Prosecutors say Macias and LaMotta had planned a mass shooting as the election hung in the balance but were thwarted by an FBI tip about their travels. A trial for the men is scheduled for October. Charges include interfering with an election.

At a preliminary hearing last year, lawyers for both men argued there was no evidence they interfered or tried to interfere with election-related activities. The lawyers said that it appeared the men were being punished for their beliefs, including support for false theories that the presidential election was fraudulent.

The criminal complaint against LaMotta for his alleged actions on Jan. 6 states he was identified through images captured on Capitol surveillance cameras as well as police body cameras. LaMotta also was identified by an FBI agent who had interviewed him after his arrest in Philadelphia.

“LaMotta entered the Capitol building through the east Rotunda doors at approximately 3:21 p.m.,” the federal complaint stated. “He was part of a group of rioters that pushed past police officers working to bar entry into the building. Police pushed LaMotta out of the building, along with other rioters, at approximately 3:29 p.m.”

An attorney was not listed for LaMotta in federal court documents related to the Capitol riot case. His attorney for the case in Philadelphia, Lauren Wimmer, did not immediately respond to an email seeking comment.