MINNEAPOLIS (AP) — A man who was intoxicated when he drove his SUV into a crowd of protesters in Minneapolis last year, killing one and injuring several others, has pleaded guilty to murder and assault just as his trial was set to begin.

Nicholas Kraus, 36, in a plea deal with prosecutors, admitted Monday to killing Deona Knajdek, one of the protesters who gathered in the city’s Uptown neighborhood after members of a U.S. Marshals Service task force fatally shot Winston Boogie Smith Jr., a 32-year-old Black man. The 31-year-old Minneapolis woman also was known as Deona Marie Erickson. 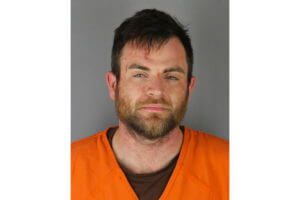 FILE – This undated photo provided by the Hennepin County, Minn., Sheriff’s Office shows Nicholas Kraus. Kraus, the man who drove his SUV into a crowd of protesters in Minneapolis last year while intoxicated, killing one and injuring several others, pleaded guilty on Monday, Oct. 24, 2022, to murder and assault just as his trial was set to begin. (Hennepin County Sheriff’s Office via AP, File)

Prosecutors said Kraus was visibly intoxicated when he sped up and tried to “jump” a car that protesters were using as a barricade, pushing it into the group in June 2021.

As part of the plea deal, Kraus’ second-degree murder charge was changed from “intentional” to “unintentional,” and one of two counts of second-degree assault with a dangerous weapon was dropped. Kraus pleaded guilty to the second assault charge. He could face more than 17 years in prison at sentencing in November.

According to the criminal complaint, Kraus told officers he believed he needed to jump over a car that protesters were using as a barricade, and though he saw people in the area, he accelerated and did not try to brake. It also says he admitted he thought he might have hit someone. There was nothing in the criminal complaint to suggest Kraus’ actions were motivated by political views or anger at the protesters.

Kraus drove into protesters a year after George Floyd was killed by police, a death that sparked widespread protests and unrest in the city and around the nation. Law enforcement shootings of other Black men have only inflamed tensions further.