DADE CITY, Fla. (AP) — A Florida man driving drunk sped through a hit-and-run investigation Sunday, running over the detached legs of a victim and nearly striking two deputies before leading officers on a high speed chase, according to the Florida Highway Patrol. 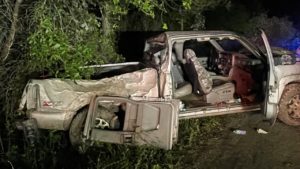 Authorities were investigating the death of a 49-year-old woman who was walking along a grassy shoulder of a Dade City roadway before being struck by a hit-and-run driver at 3:30 a.m. Authorities found her torso on the shoulder and her legs in the roadway.

Thomas Krummen, 23, approached the scene at a high speed, driving directly at investigators. He ignored commands to stop, ran over the victims legs and fled. Troopers chased him and used a maneuver with a patrol car to force him to stop, the highway patrol said.

Two passengers in the pickup truck tried to flag down troopers and exit the vehicle, the highway patrol said.

And video #3 of 3 for the pursuit stemming from the fatal crash on US-301 early this Sunday morning that terminated near Webster, FL. pic.twitter.com/dPB36hzkOd

Krummen was charged with with aggravated assault with a motor vehicle upon a law enforcement officer, reckless driving, DUI, fleeing and eluding, destruction of evidence, driving while license revoked and false imprisonment.

It was the eighth time he’s been arrested in Pasco County in less than four years, according to jail records. The jail didn’t have information on his current status.