CHARLOTTESVILLE, Va. (AP) — A former University of Virginia lacrosse player serving time for the murder of his ex-girlfriend testified Wednesday in a wrongful death lawsuit that the only mental image he has of her death was of blood coming out of her nose, and that he doesn’t remember breaking into her room and leaving her fatally injured. 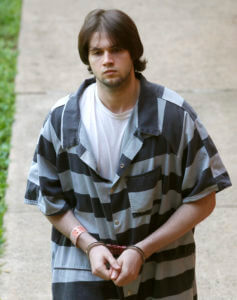 George Huguely V, who was convicted of second-degree murder in the 2010 killing of his on-again, off-again girlfriend Yeardley Love, a member of the UVA women’s lacrosse team, took the stand in the lawsuit filed by Sharon Love. Yeardley’s mother is the administrator of her daughter’s estate and her lawsuit seeks $29.5 million in compensatory damages and $1 million in punitive damages.

Wednesday was the sole day Huguely was scheduled to appear in court after an earlier ruling determined he didn’t have the right to attend each day of the trial.

Dressed in a plain white, button-down shirt, blue jeans and sporting shoulder-length hair and a short, cropped beard, Huguely told Paul Bekman — the attorney for the Loves — he remembered very little due to his excessive drinking, The Daily Progress of Charlottesville reported.

Over the weekend of Love’s murder, Huguely said he drank frequently and excessively, leading to him having little memory of the night of May 2, 2010, and the early morning of May 3. Comparing his memory to a slideshow, Huguely said it was as though 98% of the slides had been removed. He claimed to not remember breaking into her room and leaving her with multiple external injuries and a fatal head injury.

Much of the testimony focused on an email exchange which started with Love sending an apology. Huguely responded with an angry message filled with insults and an accusation that Love had sex with another man to hurt him. In one of the last emails in the exchange, Huguely wrote “I should have killed you” in response to Love. Huguely said he had not meant that statement to be literal.

Huguely’s attorney, Matthew Green, talked about the defendant’s time in prison, which has involved completing alcohol and drug treatment programs. He was sentenced to 23 years in prison when he was convicted and is now about halfway through the sentence. 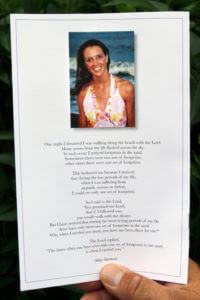 FILE – A person holds a program for the funeral of slain University of Virginia lacrosse player Yeardley Love in Baltimore, Md., on Saturday, May 8, 2010.  (AP Photo/Jacquelyn Martin, File)

Toward the end of his testimony, Huguely turned to Love’s mother and sister and apologized for killing her.

“I miss her and think about her every day. I would do anything to take back that night,” he said. “I take responsibility for what happened to her and I should have never gone over to her apartment that night.”

The apology caused Love’s sister to shake her head before quietly trying to stifle a sob.

Sharon Love initially filed a wrongful death lawsuit in 2012, but it was voluntarily dismissed years later after court rulings determined that Huguely was not entitled to coverage under a $6 million homeowners insurance policy held by his family.

A new lawsuit filed in 2018 dropped negligence claims, but added a claim alleging that an assault and battery by Huguely was the proximate cause of Love’s death. The lawsuit argues that punitive damages are warranted because the physical force used by Huguely and his failure to act by leaving her bleeding, injured and without any medical attention mean that he acted “with actual malice” and in “conscious disregard for the safety and life of Love, thereby willfully causing Love’s injuries.”