LOS ANGELES (AP) — Police chased and tackled a man who turned out to be holding a baby in his arms, who suffered a skull fracture, authorities said. 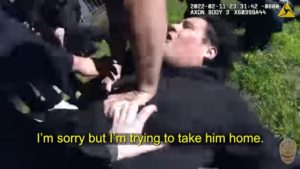 Shortly before 11:30 p.m. Feb. 11, police tried to stop a Jeep Wrangler driven erratically by Josue Huerta, 25, who was “shouting out something that was unintelligible,” Police Chief Michel Moore told the city Police Commission after the incident.

That led to an 11-minute chase that began with the fleeing car slamming into a flatbed truck and ended with Huerta jumping out of the car and running away, police said.

The LAPD on Sunday released police body camera and dashcam footage that shows officers racing after Huerta and an officer tackling him. He falls onto a grass lawn face-first.

“Unbeknownst to any officer, the officer was holding a 10-month-old infant,” police Capt. Stacy Spell said in the video.

The video shows police taking the crying baby from the man after he is on the ground. 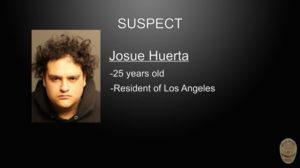 The boy was taken to the hospital, where he was determined to have a skull fracture, although Moore said it wasn’t immediately clear whether the boy was injured during the arrest, the previous car crash or elsewhere.

The baby also was found to have cocaine and fentanyl in his system, police said. He was released to his mother.

A baby carrier was found in the Jeep along with drugs, cash and three unloaded pistol magazines, police said.

He remained jailed Monday on $215,000 bail. It wasn’t immediately clear whether he had an attorney to speak on his behalf.