NEW YORK (AP) — The city of New York is settling lawsuits filed on behalf of two men who were exonerated last year for the 1965 assassination of Malcolm X, agreeing to pay $26 million for the wrongful convictions which led to both men spending decades behind bars.

The state of New York will pay an additional $10 million. David Shanies, an attorney representing the men, confirmed the settlements on Sunday. 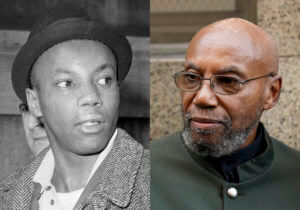 FILE – This combination photo shows Muhammad Aziz, a suspect in the slaying of Malcolm X, after his arrest, in New York, on Feb. 26, 1965, left, and Aziz outside court after his conviction in the killing of Malcolm X was vacated on Nov. 18, 2021, in New York. The city of New York is settling lawsuits filed on behalf of Aziz and Khalil Islam, who were exonerated in 2021 for the 1965 assassination of Malcolm X, agreeing to pay $26 million for the wrongful convictions which led to both men spending decades behind bars, according to an attorney representing the two men, Sunday, Oct. 30, 2022. (AP Photo/File)

“Muhammad Aziz, Khalil Islam, and their families suffered because of these unjust convictions for more than 50 years,” said Shanies said in an email. “The City recognized the grave injustices done here, and I commend the sincerity and speed with which the Comptroller’s Office and the Corporation Counsel moved to resolve the lawsuits.”

Shanies said the settlements send a message that “police and prosecutorial misconduct cause tremendous damage, and we must remain vigilant to identify and correct injustices.”

Last year, a Manhattan judge dismissed the convictions of Aziz, now 84, and Islam, who died in 2009, after prosecutors said new evidence of witness intimidation and suppression of exculpatory evidence had undermined the case against the men. Then-District Attorney Cyrus Vance Jr. apologized for law enforcement’s “serious, unacceptable violations of law and the public trust.”

The New York City Law Department, through a spokesperson, said Sunday it “stands by” Vance’s opinion that the men were wrongfully convicted and the financial agreement “brings some measure of justice to individuals who spent decades in prison and bore the stigma of being falsely accused of murdering an iconic figure.”

Shanies said over the next few weeks the settlement documents will be signed and the New York court that handles probate matters will have to approve the settlement for Islam’s estate. The total $36 million will be divided equally between Aziz and the estate of Islam.

Aziz and Islam, who maintained their innocence from the start in the 1965 killing at Upper Manhattan’s Audubon Ballroom, were paroled in the 1980s. 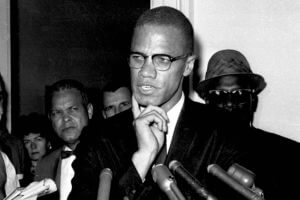 FILE – Malcolm X speaks to reporters in Washington on May 16, 1963. The city of New York is settling lawsuits filed on behalf of two men who were exonerated in 2021 for the 1965 assassination of Malcolm X, agreeing to pay $26 million for the wrongful convictions which led to both men spending decades behind bars, according to attorneys for the men Sunday, Oct. 30, 2022. (AP Photo/File)

Malcolm X gained national prominence as the voice of the Nation of Islam, exhorting Black people to claim their civil rights “by any means necessary.” His autobiography, written with Alex Haley, remains a classic work of modern American literature.

Near the end of Malcolm X’s life, he split with the Black Muslim organization and, after a trip to Mecca, started speaking about the potential for racial unity. It earned him the ire of some in the Nation of Islam, who saw him as a traitor.

Aziz and Islam, then known as Norman 3X Butler and Thomas 15X Johnson, and a third man were convicted of murder in March 1966. They were sentenced to life in prison.

The third man, Mujahid Abdul Halim — also known as Talmadge Hayer and Thomas Hagan — admitted to shooting Malcolm X but said neither Aziz nor Islam was involved. The two offered alibis, and no physical evidence linked them to the crime. The case hinged on eyewitnesses, although there were inconsistencies in their testimony.

Attorneys for Aziz and Islam said in complaints that both Aziz and Islam were at their homes in the Bronx when Malcolm X was killed. They said Aziz spent 20 years in prison and more than 55 years living with the hardship and indignity attendant to being unjustly branded as a convicted murderer of one of the most important civil rights leaders in history.

Islam spent 22 years in prison and died still hoping to clear his name.