KANSAS CITY, Mo. — The Kansas City, Missouri, mother who was arrested and charged with murdering her 6-year-old son is being held without bond and will undergo a mental health evaluation.

The prosecution of Tasha Haefs, 35, was suspended Thursday after a mental health evaluation was ordered in the case.

A public defender also has been ordered to represent Haefs in the case. 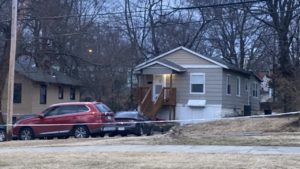 A child under the age of 10 was killed Wednesday morning, Feb. 16, 2022, in Kansas City, Missouri. The incident took place on Indiana Avenue and a woman is in custody. (KSHB)

KCPD officers responded to a house in the 7300 block of Indiana Avenue around 11:45 p.m. on Tuesday after a female caller told dispatchers the devil was trying to attack her.

Arriving officers were unable to make contact with anyone inside the residence, but could hear a woman singing and also saw blood and other evidence of a crime.

Inside, officers discovered the body of the 6-year-old boy, identified Thursday as Karvel Stevens, and a dog that also had been killed.

Haefs was taken into custody and two bloody knives were recovered at the scene.

According to court records, she was arraigned Thursday in Jackson County Circuit Court at which time the orders for a mental health evaluation and public defender also were entered.

Haefs, who has been charged with first-degree murder and armed criminal action, is due back in court Feb. 24 for a bond review hearing, according to court records.

Karvel’s murder has shocked the community and led to intensified calls for action to prevent violence and address mental health.

This story was originally published Feb. 18 by KSHB in Kansas City, an E.W. Scripps Company.