GUADALAJARA, Mexico (AP) — Their spiritual leader is behind bars in California after pleading guilty to sexually abusing minors. Yet legions of followers of Naasón Joaquín García in his home base in Mexico remain fervently loyal to him, viewing his imprisonment as a challenge that will strengthen their church, La Luz del Mundo (The Light of the World), rather than weaken it. 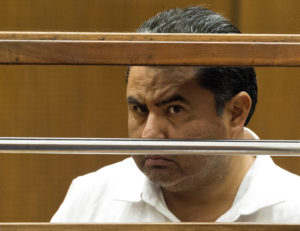 FILE – Naason Joaquin Garcia, the leader of the La Luz del Mundo, Spanish for The Light of the World, appears in Los Angeles County Superior Court, on June 5, 2019. The leader of the multinational, Mexico-based Christian church is imprisoned in California after pleading guilty to sexually abusing minors. Yet legions of followers in his home city of Guadalajara remain fervently loyal to him. (AP Photo/Damian Dovarganes, File)

His continued hold on his flock was evident recently at the Christian church’s main temple in Guadalajara, as thousands gathered to pray for their absent leader during their Holy Supper, the most sacred festivity for La Luz del Mundo. To gasps of surprise, Joaquín García addressed the congregation by telephone from his Los Angeles prison, where he is serving a 16-year sentence.

“I do not see the bars that separate me from you,” he told his followers. “I see your beautiful faces … because you are the children of God.”

Even outside the temple, the sound of his voice stirred emotions among dozens of devotees guarding entries to the sanctuary. Nearly all closed their eyes. Many lifted their fists. Some knelt and wept.

Near the end of the call, Joaquín García asked his followers to raise their hands and their voices to God and repeat after him: “I promise you, Lord, that whatever the suffering, I will never abandon you.”

It seems clear that many members of the church, founded in Mexico in 1926 and now active in many countries, aren’t ready to abandon Joaquín García as their “apostle” — the term used for the church’s leader. Many believe he was sent by God to preach to them and are convinced he is innocent, despite his guilty plea.

“The apostle always shows determination to move forward,” said Phares Ruiz, who traveled from El Salvador to attend the Holy Supper. “He’s firm in his convictions, and the church is firm as well in its purpose of moving forward.”

Ruiz told The Associated Press that his family has belonged to La Luz del Mundo for three generations.

Joaquín García, 53, was arrested in 2019 in California. He initially faced more than 20 charges, but most were dismissed after a plea deal with prosecutors. The church contended that prosecutors withheld or doctored evidence, and said Joaquín García pleaded guilty because he didn’t think he could get a fair trial. 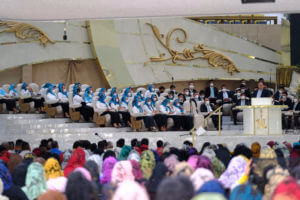 Faithful attend a Santa Cena or Holy Supper service in the La Luz del Mundo or the Light of the World flagship temple in Guadalajara, Mexico, Saturday, Aug. 13, 2022. Thousands gathered to pray for their absent leader, Naason Joaquin Garcia, during their Holy Supper service, the most sacred festivity for La Luz del Mundo. Garcia addressed the congregation by telephone from his Los Angeles prison, where he is serving a 16-year sentence after pleading guilty to sexually abusing minors. (AP Photo/Refugio Ruiz)

“The Apostle of Jesus Christ has had no choice but to accept with much pain that the agreement presented is the best way forward to protect the church and his family,” the church said.

The home base of the church is the Guadalajara neighborhood of Hermosa Provincia, Spanish for “beautiful province.” Jericho, Bethlehem and Nazareth are among the names of roads converging on the white temple that locals call “the cake,” for its white tiers that diminish in size as they rise upward.

Congregation members in the neighborhood call each other “brother” and “sister” and take pride in helping one another. The church’s media relations office claims there is no crime in the area.

The neighborhood has cafeterias, clinics, a recreation center and a store that sells Bibles and religious-themed games for children. From the walls hang photographs of Joaquín García, smiling and wearing a tuxedo. Spanning the main street is a sculpture spelling “innocent” in Spanish.

Sara Pozos, 49, is among many in the neighborhood who believe their leader’s imprisonment has strengthened the church.

“I think it changed for the better in the sense that now we feel more united, and we feel more empowered,” she said.

“It has been a very difficult issue, of course, for him and for us,” she added. “We all suffer something in life, but one learns to know those moments where you see that God is doing something to help you, to get ahead, not to let you fall.”

“For us everything is very nice, everything continues to work,” she said. “Ministers, pastors and deacons have their same duties. They bless the bread, the wine, and do other things as if he were here, although physically he is not.”

The jailed leader is the grandson of La Luz del Mundo’s founder: Eusebio Joaquín González, a member of the military who began preaching in 1926. He’s known to church members as Aarón — a result, he said, of God asking him to change his name.

Aarón’s wife was the church’s first member. Today it claims a membership of more than 5 million in some 50 nations.

La Luz del Mundo is sometimes described as evangelical, but its members do not embrace this term. The church’s doctrine is learned from the cradle. Parents give biblical names to their children and take them to the temple at 40 days old to promise they will guide them to follow their path. 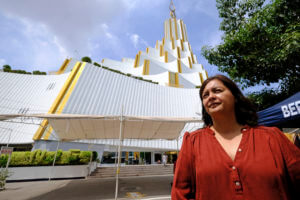 Congregant Sara Pozos stands outside the La Luz del Mundo, Spanish for The Light of the World, church’s home base, during an interview in the Hermosa Provincia neighborhood of Guadalajara, Mexico, Saturday, Aug. 13, 2022. Bethlehem and Nazareth are among the names of roads converging on the white temple that locals call “the cake,” for its white tiers that diminish in size as they rise upward. (AP Photo/Refugio Ruiz)

Most teachings translate into something quotidian. During services, the women sit to the right and men to the left. In some cities, people tithe more than 10% of their monthly income to the church. Biblical verses are cited to explain behavior.

Castillo, a recently married woman of 25, told AP the church advises members how “to lead a decent life,” in which women may not drink alcohol or go out on frequent dates. Like other women in Hermosa Provincia, she wears dresses and skirts that are not form-fitting, eschews makeup and earrings and wears her hair long.

“It is not sufficient to say ‘I have converted’ or “I have baptized’” she said. “You have to follow certain steps to prove your loyalty.”

For some young people, these steps include memorizing songs honoring the apostle, reading the Bible before bed and not marrying someone from outside the church.

“All this goes to show that although you are part of this world, you have accepted a very particular way of life because you are Christian,” Sánchez-Walsh said.

Those born in the community are baptized at 14 because, according to the church, that lets them decide whether to reaffirm or leave the faith. Nevertheless, there are former members who say their ceremony was not optional.

Ahead of the baptism, in a ritual known as “the revivals,” children undergo days of prayer and fasting inside a temple. The revival consists of repeating “Glory to Christ” nonstop until the youths are heard speaking in tongues to testify that the Holy Spirit has entered them.

For Raquel Haifa, 43, fulfilling the revivals was a traumatizing experience that she considers abusive, because minors are not able to decline to take part.

“I did cry, because I was saying, ‘God, deliver me from this, make this time pass quickly,’” Haifa said from Texas.

Currently, journalists are not allowed to attend services or take photographs inside the church’s temples. Since Joaquín García’s arrest, La Luz del Mundo’s media relations team says it cannot make official statements on his case because litigation is ongoing.

On Sept. 8 a lawsuit was filed in California against Joaquín García and four church members alleged to be complicit in the sex abuse. The suit was filed by five women who — under the pseudonym Jane Doe — were identified as victims in the original criminal charges against him. 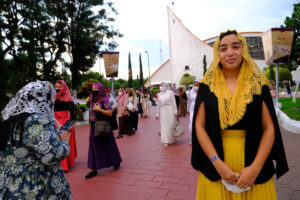 Congregant Sailem Castillo poses for a photo outside the La Luz del Mundo, Spanish for The Light of the World, in the Bethel neighborhood of Guadalajara, Mexico, Saturday, Aug. 13, 2022. Castillo said she remains upbeat despite the imprisonment of their church leader Naason Joaquin García who is serving a 16-year sentence in California after pleading guilty to sexually abusing minors. (AP Photo/Refugio Ruiz)

It accuses Joaquín García of conditioning victims, under the guise of religion, to serve him above all else, ultimately resulting in the sexual abuse over the course of several years.

The lawsuit includes detailed accounts from the five plaintiffs alleging that they were pressured by Joaquín García and his associates into performing for pornographic photo shoots, and were forced to engage in sex acts with him.

“The church weaponized the faith of their most vulnerable members,” said Jonati Joey Yedidsion, one of the lawyers handling the lawsuit. “Instead of protecting those innocent women, Naasón and the church fostered and then brutally preyed on their blind trust and allegiance in the ‘Apostle’”.

The case has been difficult for some former members who have distanced themselves from the church.

Speaking on a podcast called “I Left a Sect,” Lo-ami Salazar said Hermosa Provincia used to be her “happy place.”

“Knowing that these abuses took place there, in my happy place, in my safe place, is horrible,” she said.

Associated Press religion coverage receives support through the AP’s collaboration with The Conversation US, with funding from Lilly Endowment Inc. The AP is solely responsible for this content. 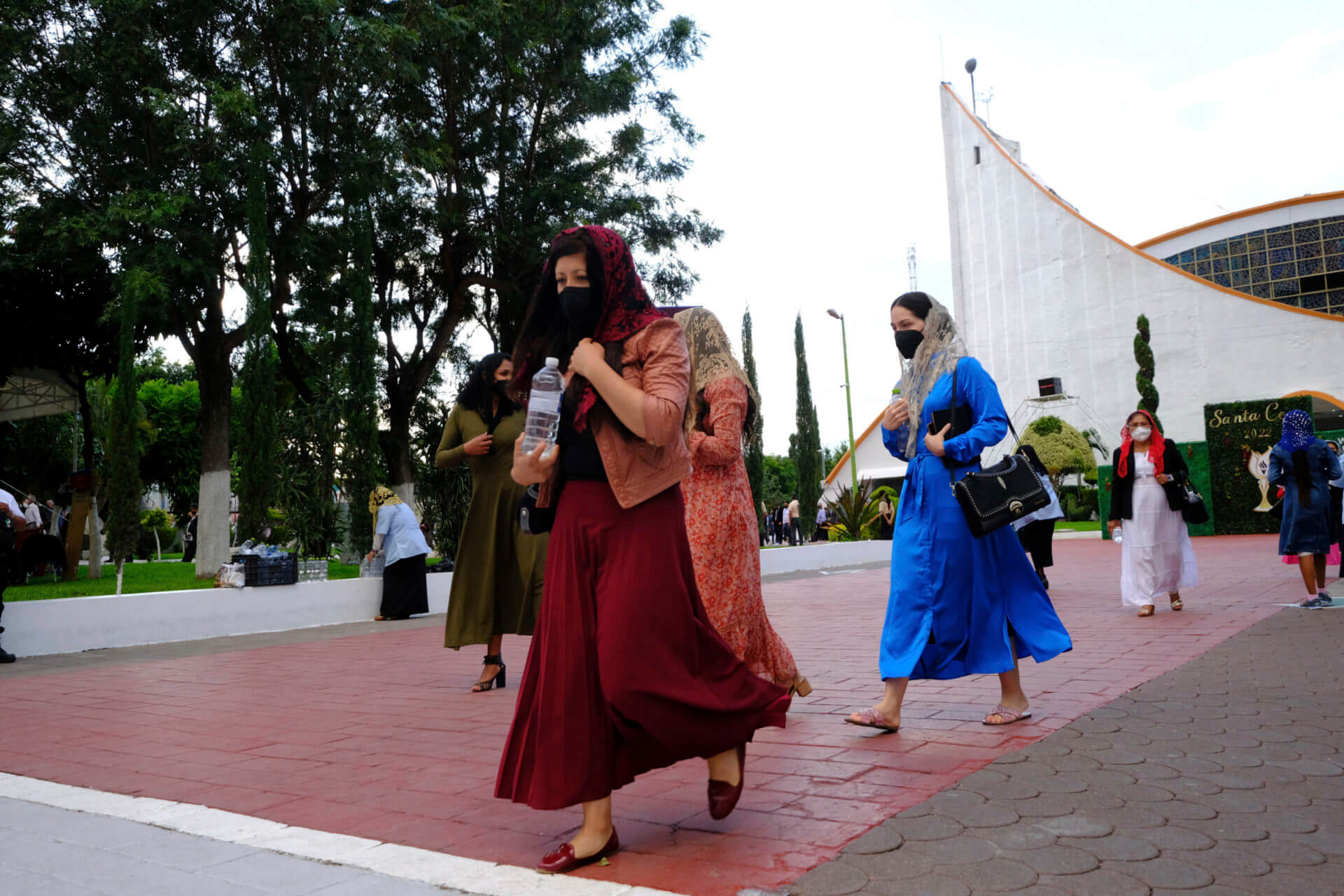 La Luz del Mundo or the Light of the World church members exit a service in the Bethel neighborhood of Guadalajara, Mexico, Saturday, Aug. 13, 2022. Female church members wear dresses and skirts that are not form-fitting, eschew makeup and earrings and wear their hair long. The religion is ”very demanding,” said Arlene M. Sánchez-Walsh, a professor of religious studies at Azusa Pacific University. “It is not sufficient to say ‘I have converted’ or “I have baptized’” she said. “You have to follow certain steps to prove your loyalty.”  (AP Photo/Refugio Ruiz)
MORE NEWS