MILWAUKEE (WTMJ) — The man convicted of first degree intentional homicide for beating his 12-year-old grandson to death was sentenced to life in prison on Monday. 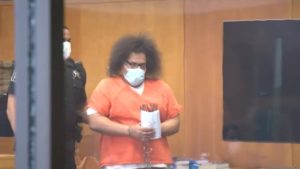 Andrez Martina in court for his sentencing. (WTMJ)

He was charged and convicted of:

A judge sentenced him to the following:

The cause of death is listed as multiple blunt force injuries to the head.

The criminal complaint states Martina asked Andre and his brother, 8 years old, to sleep over at his house. Martina planned to take to the boys shopping for school supplies the next day.

That’s when the grandmother woke her daughter and her boyfriend and told them to go to the defendant’s house near 46th and Glendale and find out what was happening.

There they found the boys and the defendant. The boyfriend immediately drove the boys to the hospital. Andre was unconscious with a severe head wound.

Andre and his brother’s disabled great grandmother, who lives with Martina, told police she was awakened by the defendant yelling at Andre. She looked up and saw the defendant hitting Andre with a hammer, according to the complaint.

Police say they found methamphetamine pills, marijuana and a firearm in the defendant’s home.

At the hospital, police learned the 8-year-old brother suffered a head laceration, fractured finger and bruising consistent with child physical abuse. The brother told investigators that Martina was angry about missing money and beat the brothers with a mallet, a sledge hammer, and a coat rack.

In an interview with police, Martina said he returned to Milwaukee from Indiana in May. “Upon returning to Milwaukee, the defendant wanted to reconnect with his grandchildren. The defendant learned [Andre] had a problem stealing,” according to the complaint.

The defendant recalled telling his grandchildren in the past, “if you lie, if you mess up in school, if you steal, I’m going to kill you.”

During the interview, the defendant also admitted to killing another boy in 1989 and “said he wanted to talk with police as the defendant has nothing to hide,” the complaint states.

This story was originally published June 6 by WTMJ in Milwaukee, an E.W. Scripps Company.