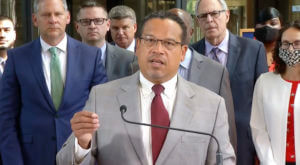 In this image taken from video, Minnesota Attorney General Keith Ellison speaks to the media Friday, June 25, 2021, at the Hennepin County Courthouse in Minneapolis, with the prosecution team, after Hennepin County Judge Peter Cahill sentenced former Minneapolis police Officer Derek Chauvin to 22 1/2 years in prison, for the May 25, 2020, death of George Floyd. (Court TV via AP, Pool)

Ellison spoke shortly after Chauvin heard his sentence for second-degree murder in George Floyd’s death. Repeating part of his statement after Chauvin’s conviction, Ellison said the sentence was a step toward accountability, even if not total justice.

He focused much of his remarks on a desire to improve trust between the community and police officers.

He urged members of the community to “peacefully, constructively but clearly” meet the moment for change. Failure to do so, he said, will cause the community to “slip deeper into a century-long cycle of inaction.”