LOS ANGELES (AP) — A judge on Monday declared a mistrial in a case against a man charged with blowing up his ex-girlfriend’s Southern California spa business, killing her and seriously injuring two others with a box rigged with explosives.

U.S. District Judge Josephine Staton declared the mistrial after jurors said they were deadlocked on the case against Stephen Beal, said Ciaran McEvoy, a spokesperson for the U.S. attorney’s office in Los Angeles.

A retrial has been scheduled for October 18, McEvoy said. 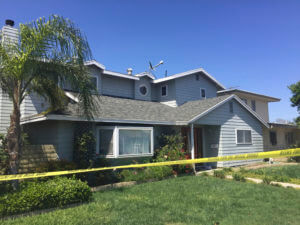 FILE – The home occupied by Stephen Beal in Long Beach, Calif., is pictured on May 16, 2018. A judge has declared a mistrial in a case against a man charged with blowing up his ex-girlfriend’s Southern California spa business, killing her and injuring two others with a box rigged with explosives. U.S. District Judge Josephine Staton declared the mistrial on Monday, Aug. 22, 2022, after jurors deadlocked on the case against Beal. (AP Photo/Amanda Lee Myers, File)

Beal, 63, was charged with killing Ildiko Krajnyak on May 15, 2018, with a package bomb sent to her Aliso Viejo spa, about 50 miles (80 kilometers) south of Los Angeles.

Krajnyak, 48, was killed in the fiery blast when she opened the box. Two clients — a mother and daughter — who she had just treated were knocked off their feet.

The blast destroyed the business and tore a large hunk from the building. Body parts were found in the parking lot.

Beal, a partner in the salon business, was jealous Krajnyak had been dating someone else and developed a “plan to destroy her,” U.S. Attorney Annamartine Salick said in opening statements. He allegedly slipped into the building with the packages while she was in Hungary was visiting family.

“This is a case about infatuation, obsession and control,” Salick said. “When Ildiko rejected his infatuation and starting dating another man, the defendant realized he could not control her.”

Defense lawyers said the FBI made a snap judgment by focusing on Beal and ignored other evidence and suspects.

“They started with a conclusion and worked their way backwards,” defense attorney Craig Harbaugh said.

Beal was arrested soon after the bombing, but explosives charges were eventually dropped when prosecutors questioned whether material found at his Long Beach home constituted a “destructive device.”

Beal claimed that explosive material found at his house were for his model rockets.

But nearly 10 months later, after what authorities called an “exhaustive” investigation, Beal was rearrested and charged.

Investigators linked Beal to fragments from the bomb, including a battery, a wire and boxes similar to the one that contained the deadly explosive. A battery used in the improvised explosive was tied to a purchase Beal made near his house.