WAYNESBURG, Pa. (AP) — Authorities have filed charges against three more people in the case of a Pennsylvania 911 operator accused of failing to send an ambulance to the rural home of a woman who died of internal bleeding about a day later.

According to a criminal complaint, the three men were charged Monday with tampering with public records, tampering with or fabricating evidence and obstruction. 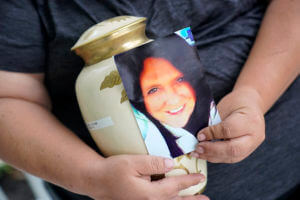 Kelly Titchenell sits on her porch in Mather, Pa., holding a photo of her mother Diania Kronk, and an urn containing her mother’s ashes, Thursday, July 7, 2022. A Greene County, Pa., detective last week filed charges against 911 operator Leon “Lee” Price, 50, of Waynesburg, in the July 2020 death of Diania Kronk, 54, based on Price’s reluctance to dispatch help without getting more assurance that Kronk would actually go to the hospital. (AP Photo/Gene J. Puskar)

They are or were managers for Greene County’s emergency management. Prosecutors allege they failed to provide policy memo binders that detail standard operating procedures.

According to the criminal complaint, the three conspired to “knowingly and purposefully conceal, withhold, omit, obstruct or pervert the release of documents” to investigators.

Earlier this month, authorities charged 911 operator Leon “Lee” Price, 50, of Waynesburg, with involuntary manslaughter in the July 2020 death of Diania Kronk, 54, based on Price’s reluctance to dispatch help without getting more assurance that Kronk would actually go to the hospital.

“I believe she would be alive today if they would have sent an ambulance,” said Kronk’s daughter Kelly Titchenell, 38.

Price, who also was charged with reckless endangerment, official oppression and obstruction, questioned Titchenell repeatedly during the four-minute call about whether Kronk would agree to be taken for treatment.