Griner has been jailed since she was arrested in mid-February at a Moscow airport after vape canisters containing cannabis oil were found in her luggage. The Phoenix Mercury standout and two-time Olympic gold medalist acknowledged in court this month that she had the canisters, but said she had no intent to break the law. 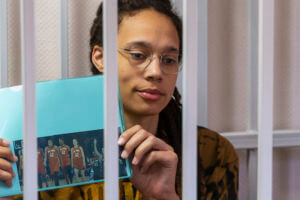 WNBA star and two-time Olympic gold medalist Brittney Griner holds up a photo of players from the recent all star game wearing her number, sitting in a cage at a court room prior to a hearing in the Khimki district court, just outside Moscow, Russia, Friday, July 15, 2022. Griner was arrested in February at the Russian capital’s Sheremetyevo Airport when customs officials said they found vape canisters with cannabis oil in her luggage. She has been jailed since then, facing up to 10 years in prison if convicted. (AP Photo/Dmitry Serebryakov)

She faces up to 10 years in prison if convicted. Her trial is scheduled to resume Tuesday.

The State Department in May designated Griner as wrongfully detained, moving her case under the supervision of its special presidential envoy for hostage affairs – effectively, the government’s chief hostage negotiator.

Russian Foreign Ministry spokeswoman Maria Zakharova said Thursday that the legalization of cannabis for medical and recreational use in parts of the U.S. has no bearing on what happens in Russia.

“If a U.S. citizen was taken in connection with the fact that she was smuggling drugs, and she does not deny this, then this should be commensurate with our Russian, local laws, and not with those adopted in San Francisco, New York and Washington,” Zakharova said. 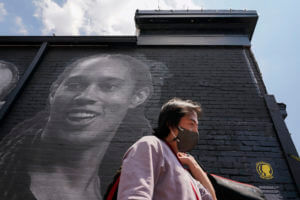 A visitor walks down an alley past a mural depicting WNBA star Brittney Griner, top left, and other American hostages and wrongful detainees who are being held abroad, Wednesday, July 20, 2022, in the Georgetown neighborhood of Washington. (AP Photo/Patrick Semansky)

“You understand, if drugs are legalized in the United States, in a number of states, and this is done for a long time, and now the whole country will become drug-addicted, this does not mean that all other countries are following the same path,” she added.

Russian media have persistently speculated that Griner could be exchanged for prominent Russian arms trader Viktor Bout, who is imprisoned in the United States, and that Paul Whelan, an American imprisoned in Russia for espionage, may also figure in an exchange.

U.S. officials have not commented on the prospects for such a trade. Russian officials have said no exchange could be discussed until the conclusion of the legal proceedings against Griner. It is unclear how long the trial will last, but a court has authorized Griner’s detention until Dec. 20.