DETROIT (AP) — A Detroit museum displaying a 1888 painting by Vincent van Gogh as part of a showing of 80 of his works said it shouldn’t be pulled into a dispute over ownership of the multimillion-dollar artwork.

The Detroit Institute of Arts said federal law gives it immunity in a lawsuit by a Brazilian collector who claims to be the owner of the painting, titled “The Novel Reader.” The museum responded in court Monday, less than a week before the rare U.S. exhibition ends. 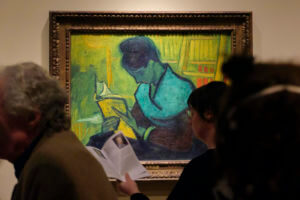 Visitors file past at the Van Gogh painting “Une Liseuse De Romans”, also known as “The Novel Reader”, during the Van Gogh in America exhibit at the Detroit Institute of Arts, Wednesday, Jan. 11, 2023, in Detroit. (Andy Morrison/Detroit News via AP)

A lawsuit claims Brokerarte Capital Partners LLC and its sole proprietor, Gustavo Soter of Brazil, acquired the painting in 2017 for $3.7 million but that a “third party” took possession of the art, which has been missing for nearly six years.

The Detroit museum is not accused of wrongdoing. It has not publicly disclosed the identity of the collector who lent the painting for the van Gogh exhibition, saying only that the oil-on-canvas painting came from a collection in Sao Paulo, Brazil.

The painting was not listed as stolen by the FBI or the international Art Loss Register, the museum said.

In addition, the museum said it’s protected by a federal law that bars judges from seizing art imported for temporary display.

Any legitimate claims about the painting “can be adjudicated in a dispute between interested parties in a court with jurisdiction over such matters and where venue is appropriate. That is not this court,” museum attorney Andrew Pauwels wrote.

U.S. District Judge George Caram Steeh last week ordered the museum to hold onto the painting while he learns more about the dispute. A hearing is scheduled for Thursday. The van Gogh exhibition ends on Sunday.