CLEVELAND (AP) — Myles Garrett is done playing for the Cleveland Browns this season. The NFL isn’t saying when the star defensive end will play again. 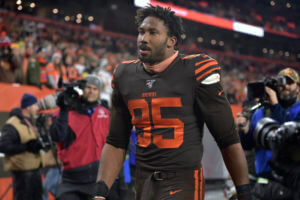 Cleveland Browns defensive end Myles Garrett walks off the field after he was ejected late in the fourth quarter of an NFL football game against the Pittsburgh Steelers, Thursday, Nov. 14, 2019, in Cleveland. The Browns won 21-7. (AP Photo/David Richard)

Garrett was suspended for at least the rest of the regular season and postseason by the league Friday, hours after he shockingly used a helmet “as a weapon” by striking Pittsburgh quarterback Mason Rudolph in the head.

Garrett’s violent outburst in the final seconds of Thursday’s nationally televised game against the Steelers landed him the longest suspension for a single on-field infraction in league history. Tennessee’s Albert Haynesworth was suspended five games in 2006.

The league’s No. 1 overall pick in 2017 was also fined an undisclosed amount and Garrett must meet with Commissioner Roger Goodell’s office before his reinstatement is considered.

After wrestling Rudolph to the ground as the Browns were closing out a rare win over their rivals, Garrett ripped off the quarterback’s helmet and clobbered him on top of the head, triggering a benches-clearing brawl that capped another physical game between the AFC North teams. 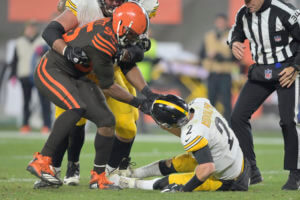 “I made a terrible mistake,” Garrett said in a statement Friday. “I lost my cool and what I did was selfish and unacceptable. I know that we are all responsible for our actions and I can only prove my true character through my actions moving forward. I want to apologize to Mason Rudolph, my teammates, our entire organization, our fans and to the NFL. I know I have to be accountable for what happened, learn from my mistake and I fully intend to do so.”

Rudolph, who suffered a concussion earlier this season, avoided serious injury and said after the game the defensive star’s attack was “cowardly and bush league.” That sentiment was shared across the league and sports world.

The league said Garrett “violated unnecessary roughness and unsportsmanlike conduct rules, as well as fighting and removing an opponent’s helmet and using it as a weapon.”

Steelers center Maurkice Pouncey, who was doing all he could to separate Garrett and Rudolph, was suspended three games without pay and also fined for punching and kicking Garrett. Browns defensive tackle Larry Ogunjobi was suspended for one game. He shoved Rudolph to the ground from behind during the melee.

The suspended players have three business days to appeal their penalties. 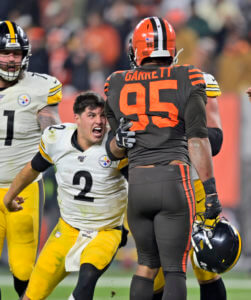 “There is no place for that in football and that is not reflective of the core values we strive for as an organization,” Browns owners Dee and Jimmy Haslam said in a statement. “We sincerely apologize to Mason Rudolph and the Pittsburgh Steelers. Myles Garrett has been a good teammate and member of our organization and community for the last three years but his actions last night were completely unacceptable. We understand the consequences from the league for his actions.”

Added Steelers President Art Rooney II: “We must always maintain composure, no matter what happens. After a hard-fought game between two rivals, it is a shame the game ended that way.”

“There are many risks an NFL QB assumes with every snap taken on the field. Being hit on your uncovered head by a helmet being swung by a 275 lb DE is not one of them,” Younger said on Twitter. “Tonight could have had a catastrophic ending. The matter will be reviewed thoroughly.”

Garrett’s disturbing actions will cost the Browns (4-6), who have moved back into the playoff race but must now play the rest of this season without their best defensive player.

There were two other nasty hits in the 135th game between Pittsburgh and Cleveland with Browns free safety Damarious Randall delivering a helmet-to-helmet shot on Steelers rookie receiver Diontae Johnson, who left with a concussion. Randall was ejected for the hit in the third quarter.

The Browns and Steelers play again in Pittsburgh on Dec. 1. 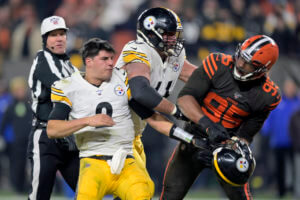 Although Garrett has been called for late hits on quarterback this season, this sort of attack was seemingly out of character for someone who is a self-proclaimed pacifist and poet. Last month, he didn’t retaliate after a fan wanting a photograph punched him in the face while stopped in traffic downtown.

The loss of Garrett is a devastating blow to Cleveland’s defense. He’s one of the league’s best rushers and the Browns are already missing end Olivier Vernon, who missed his second game Thursday with a knee injury.

The Browns have been one of the league’s most penalized under first-year coach Freddie Kitchens. The Garrett episode came just a few hours after the team released troubled wide receiver Antonio Callaway, who was suspended Friday by the league for another violation of the substance abuse policy.

Further, the team recently released safety Jermaine Whitehead after he posted threatening messages on Twitter following a loss. And the Browns were criticized for signing running back Kareem Hunt, who was suspended for the first eight games this season for two physical off-field altercations when he was with Kansas City. 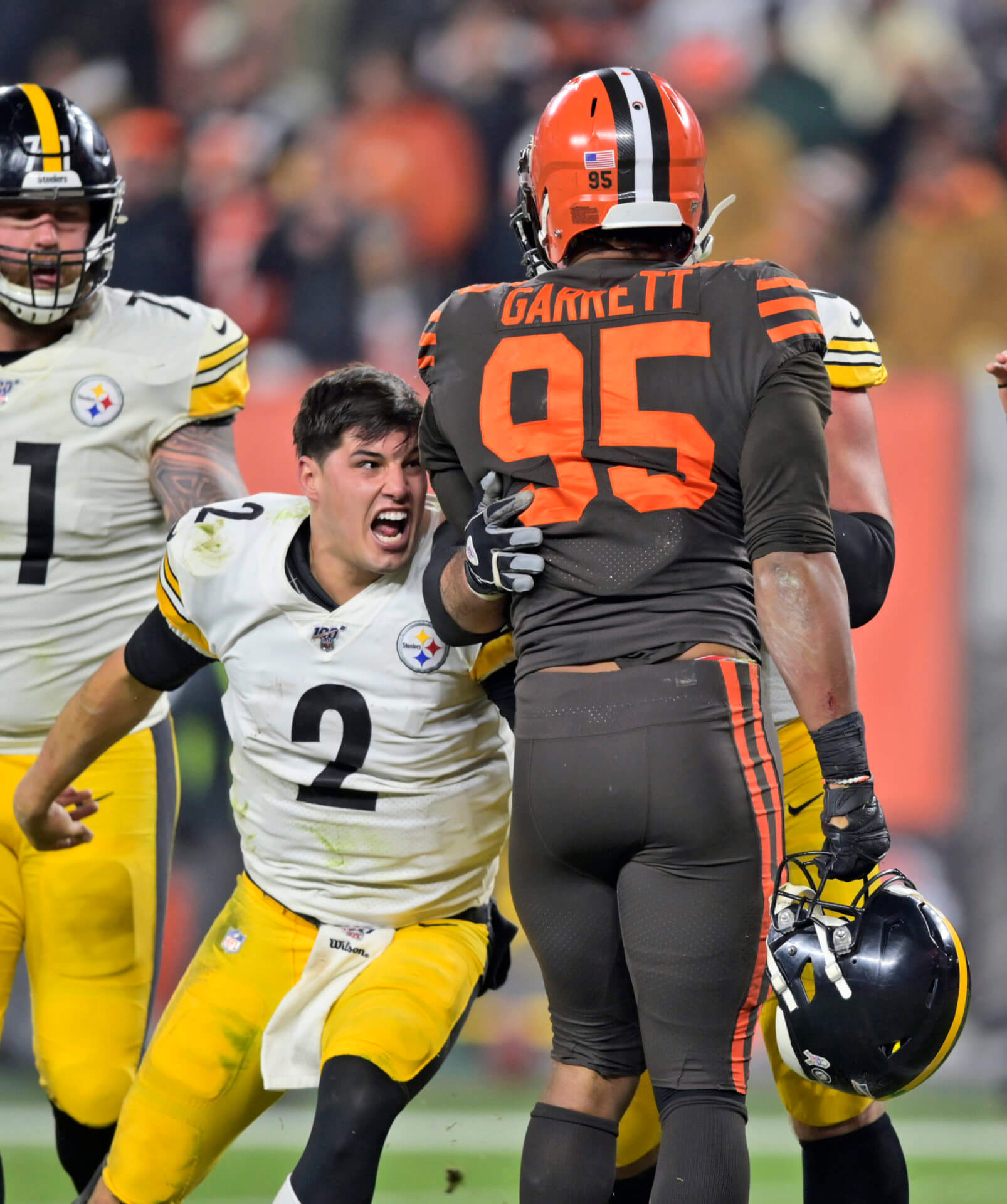