DETROIT (WXYZ) — There is new information in the murder of a young woman who was gunned down while jogging.

The case of Alexandra Brueger has baffled detectives and her family for five years. Now, Ally’s family is coming forward with new details in the hopes this killer can be caught.

When gunshots tore through tiny Rose Township on a sunny Saturday in July of 2016, time stopped for Nikki and Franz Brueger. 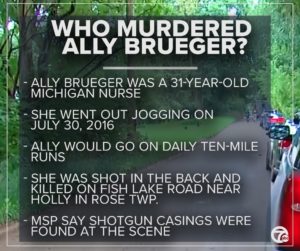 “It feels like it was yesterday,” said Nikki Brueger, Ally’s mother. “I think about it all the time.”

“You will never get any closure, it will never be the same,” said Franz Brueger, Ally’s father.

Alexandra “Ally” Brueger was Franz and Nikki’s only child. She was Nikki’s best friend, and Franz’s pride and joy. Ally was jogging on Fish Lake Rd when someone murdered her. The route was part of her regular 10-mile run.

Police say the killer or killers fired four shots, one of them fatally wounding the petite 31-year-old.

“That’s the thing that haunts me – is the terror, the terror that she must have felt when that person pointed that shot gun at her.”

At the time, Michigan State Police said they believed they’d have the case solved quickly.

“We’re pretty confident that we’ll be able to have this sewn up within a couple days for sure,” Michigan State Police First Lt. Michael Shaw said in 2016. “It appears that she probably knew the individual that was responsible for this.”

MSP Detectives never ruled out the possibility the murder was random and say they’ve followed up on hundreds of tips. But for a while some of the focus was on Ally’s former boyfriend, who she had met while working as a nurse at Ascension Providence Hospital in Novi. He has denied killing her.

And now Ally’s parents are revealing information they’ve recently learned because they hope it can crack the case.

“The lead detective for the case, as well as the First Lt. in that division both told me the wrong information is out there,” said Nikki. “Ally did not know her killer.”

The Bruegers fear potential witnesses may have discounted details they noticed the day of the murder by assuming the killer was someone close to Ally.

“The shooter was a stranger. Ally did not know who pulled the trigger,” said Nikki. “It really changes the scenario from what they said in 2016 — to calm the public, in my estimation. It maligned her character because when that happened, people would say, ‘oh what kind of girl was this– who did she hang around with?’ They didn’t know she was an RN. They didn’t know she never drank, didn’t do drugs,” said Nikki. 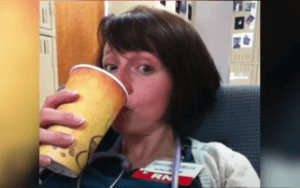 They’re asking anyone who saw a vehicle speeding or driving erratically in the area of Fish Lake Road, S. Fenton Road or anywhere nearby on July 30, 2016 to please come forward.

“Was this a failed abduction? She wouldn’t get in somebody’s car. The only thing she could do was turn to run to escape. Or this is some human trafficking thing,” said Nikki.

“Somebody needs to speak up,” said Franz.

The Bruegers say they’re also adding more money to the Crime Stoppers reward fund, bringing the total amount available to $20,000 for information that leads to an arrest.

“So that’s a $20,000 reward for this much information,” said Nikki holding up her fingers about an inch apart. “And this is the length of someone’s name. That’s all – it’s anonymous! Or, this is a license plate number, or a color of a vehicle, or something you heard in a bar somewhere.”

Nikki and Franz Brueger don’t like to show emotion publicly. But the anger and frustration in their voices make it clear – they desperately want this killer brought to justice. Franz still walks to the spot where his only child was gunned down, no matter the weather – haunted by the idea he wasn’t there that day to protect her. He also keeps Ally’s car and her bedroom remains untouched 5 years later in their home.

Nikki says she sobs driving home from the grocery store, because that’s the time she and Ally would hang out together at the end of a long day.

The Bruegers are grateful to everyone who’s added running shoes to the memorial for Ally in their yard, and they try to take comfort in Ally’s rescued boxer Zeus. But what they really want are answers.

All you have to do is make a phone call… I’m begging you: release yourself from it. Just pick up a phone,” said Nikki.

If you have any information about Ally Brueger’s case please call Crime Stoppers at 1-800-SPEAKUP: https://www.1800speakup.org. You do not have to give your name.

Michigan State Police would not do an interview with WXYZ about this case. They continue to ask for the public’s help in solving this murder. You can provide tips at 1-855-MICHTIP.

This story was originally published July 30, 2021, by WXYZ in Detroit.