PHOENIX (KNXV) — New information is being released about the kidnapping and murder of an Phoenix woman.

According to court records, on the morning of Sunday, Jan. 16, Phoenix police officers were called to a home on Colter Street for a missing person call.

Irene Luevano’s family reported she was last seen Saturday night driving with her boyfriend, Jorge Quintero Lara, who she lived with. 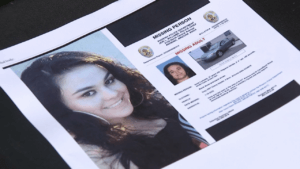 This image provided by KNXV shows Irene Luevano, who was killed Jan. 15. (KNXV)

On Sunday morning, the family received a phone call from Luevano who said she had been stabbed in the neck by Lara and asked her family to call the police.

The family attempted to call her back but could not reach her.

Later that afternoon, Lara showed up at a Valley hospital with a “sharp-force injury” to his stomach.

When asked by investigators about his injury, Lara reported he was robbed and denied any altercation with Luevano. He was then arrested on unrelated charges.

During the investigation, detectives learned Lara’s cellphone and Luevano’s cellphone were “co-located” in the Phoenix area until about 5:30 a.m., at which point their devices separated.

When investigators followed up on the location of Luevano’s device, they located her vehicle in the area with a large amount of blood inside and outside of the vehicle. Forensic evidence revealed the blood belonged to both Lara and Luevano.

On January 20, Luevano was found dead in the desert in western Arizona.

Investigators conducted an extensive scene investigation and Lara, who was still in custody on unrelated charges, was brought back to police headquarters to be further interviewed.

Lara reportedly admitted to stabbing Luevano in the neck while driving in Phoenix.

He stated Luevano ran from the vehicle and he reported capturing her and putting her back into the car. 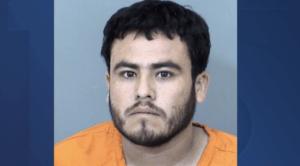 They drove out to western Arizona, where a further altercation took place and Lara was stabbed by Luevano, documents show.

Lara reportedly grabbed the knife from Luevano, cut her neck, and stabbed her multiple times.

Believing Luevano was dead, Lara dragged her into the desert and left her there.

A witness, identified by police as Diego Teran, a roommate of Lara’s, was contacted by investigators, and admitted to being with Lara at the time of the murder, documents say.

He reported hearing Lara say he was going to kill Luevano as they drove out to the desert.

He observed Lara stab the victim multiple times and drag her body into a secluded location in the desert.

Teran escorted investigators to the location of Luevano’s body, which appeared to have multiple stab wounds.

According to documents, Teran admitted to lying to officers that initially came to his door on January 16 because, before the murder, Lara threatened to kill his family if he said anything.

Teran is facing charges related to hindering the investigation by delaying the finding of the scene, victim, evidence, which potentially caused the destruction on evidence, according to police.