SANTA FE, N.M. (AP) — A New Mexico woman accused of causing a crash that killed a police officer and a retired firefighter after lying about having been kidnapped is scheduled to make an initial court appearance Tuesday on murder and other charges.

Jeannine Jaramillo, 46, appeared in court Monday on a separate drug charge. A criminal complaint stated she was concealing methamphetamine in a body cavity when she was booked over the weekend on charges related to the deadly pursuit.

Jaramillo faces two counts of first-degree murder in the deaths of Santa Fe police Officer Robert Duran, 43, and Frank Lovato, 62. Lovato was a retired firefighter from the northern New Mexico city of Las Vegas who was driving a pickup truck and not involved with last Wednesday’s pursuit. 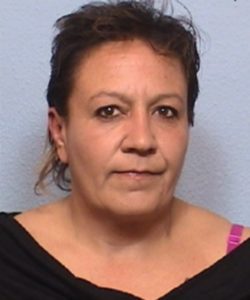 Jaramillo also faces charges of receiving or transferring a stolen motor vehicle, aggravated fleeing and tampering with evidence in the First Judicial District in Santa Fe.

“There is, without question, sufficient cause to assert that Jaramillo was driving the stolen vehicle willfully and freely from any kind of duress,” District Attorney Mary Carmack-Altwies said during a news conference Saturday. “I am confident in saying that Jaramillo acted on her own accord and in a manner that is consistent with her recent criminal behavior of deceit and disregard for public safety.”

Carmack-Altwies said her office will seek to keep Jaramillo behind bars until trial.

Court records show Jaramillo has a lengthy criminal record that includes two instances last fall in which she was pursued by Cibola County authorities while driving stolen vehicles. She told officers then, too, that she was held at knifepoint, but authorities never found the alleged attacker.

Prosecutors asked the court to dismiss the charges from the first incident in September, pending further investigation. Records show Jaramillo was arrested again in October by a Cibola County sheriff’s detective investigating the theft of a work truck. That case was dismissed in November to allow for more investigation.

Jaramillo also has been arrested over the years for receiving or transferring stolen motor vehicles, auto burglary, shoplifting and attempted aggravated battery upon a peace officer.

In the latest case, authorities reported the car that Jaramillo crawled out of after crashing into another vehicle had been reported stolen in northern New Mexico days earlier. Court documents also say DNA found on the airbag belonged to Jaramillo, and evidence from the vehicle’s computer showed there was only one person inside at the time of the crash.

During an interview with police, Jaramillo told investigators that her boyfriend hit her, poured gasoline on her and tried to kidnap her at knifepoint. Authorities noted inconsistencies in her story, including that she had no physical marks, her clothing did not smell of gasoline and she could not provide information to identify the boyfriend, according to court documents.

A police officer reported that he saw only a woman get out of the car. The officer also said the keys to the stolen car were found in the back seat of the police patrol unit where Jaramillo was seated after the crash.