NEW YORK (AP) — The NFL is telling a judge there are multiple reasons why a lawsuit brought against it by three Black coaches who allege racist hiring practices should fail.

In the letter released Thursday in advance of an initial hearing before a Manhattan federal judge, the league said it will either ask that the claims of coach Brian Flores and two other coaches be forced into arbitration or be dismissed without a trial because they lack legal merit. 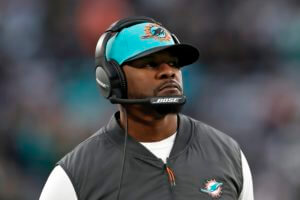 FILE – Miami Dolphins head coach Brian Flores stands on the sidelines during an NFL football game against the New York Jets on Nov. 21, 2021, in East Rutherford, N.J. The NFL is telling a judge there are multiple reasons why a lawsuit brought against it by three Black coaches, including Flores, who allege racist hiring practices should fail. (AP Photo/Adam Hunger, File)

The letter was prepared jointly by lawyers for the coaches and the NFL to notify the judge of each side’s positions in advance of the May 2 hearing.

Flores, who was fired as head coach of the Miami Dolphins in January, had alleged in his lawsuit that racist hiring practices by the NFL, particularly for coaches and general managers, left the league “rife with racism” even as it publicly condemns it.

The two other coaches — Steve Wilks and Ray Horton — joined Flores in the lawsuit earlier this month.

Flores, who led the Dolphins to a 24-25 record over three years, was fired after the Dolphins went 9-8 this past year in a second-straight winning season. The team failed to make the playoffs during Flores’ tenure, despite winning 10 games in 2020.

Flores has since been hired as an assistant coach by the Pittsburgh Steelers.

The NFL’s lawyers wrote in the letter that the league and its teams deny the lawsuit’s allegations, which include claims that Flores underwent a “sham interview” with the Denver Broncos in which team officials showed up an hour late and was cast as the “angry Black man” by the Dolphins after refusing to violate recruiting rules and tank for a better draft pick. 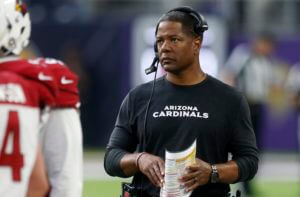 FILE – Arizona Cardinals head coach Steve Wilks watches from the sideline during an NFL football game against the Minnesota Vikings on Oct. 14, 2018, in Minneapolis. The NFL is telling a judge there are multiple reasons why a lawsuit brought against it by three Black coaches, including Wilks, who allege racist hiring practices should fail. (AP Photo/Jim Mone, File)

“Defendants have not discriminated against Plaintiffs (or the Black coaches and general managers they purport to represent) on the basis of their race, nor have Defendants retaliated against Mr. Flores for filing this lawsuit,” the lawyers said.

They claimed “numerous defenses” to the lawsuit’s assertions, including jurisdictional, venue and statute-of-limitations defenses, but said the coaches must arbitrate their claims according to the terms of employment agreements with the NFL and its teams. They noted that the Dolphins have already notified lawyers for Flores that his claims are subject to arbitration.

But even if the lawsuit proceeded, the claims “lack legal merit under the relevant statutes,” the letter said.

It cited several reasons, including that the coaches would have to prove that they would not have experienced the alleged discrimination if they were not Black.

“Mr. Flores himself alleges that he was terminated by the Dolphins for reasons plainly unrelated to his race, including his alleged refusal to intentionally lose games or to violate NFL rules,” the lawyers wrote. 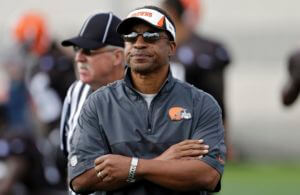 FILE – Cleveland Browns defensive coordinator Ray Horton watches training camp practice at the NFL football team’s facility in Berea, Ohio, on Aug. 13, 2013. The NFL is telling a judge there are multiple reasons why a lawsuit brought against it by three Black coaches, including Horton, who allege racist hiring practices should fail. (AP Photo/Mark Duncan, File)

As to the other coaches, the league’s lawyers said they have not identified a particular employment practice that is causing a disparate impact on Black coaches or coaching candidates.

In the same letter, lawyers for Flores and the other coaches said they will oppose the NFL’s plans to force arbitration or to dismiss the case.

They said the NFL has rejected their proposal to use mediation with the inclusion of a neutral third party, including retired federal judges and members of the legal and civil rights community.

The NFL’s lawyers, though, wrote in response that the league and its teams are “engaged in ongoing efforts to improve diversity among coaches and staff, and would welcome the involvement of Plaintiffs and other Black coaches and executives in those efforts.”