DALLAS (AP) — A Texas man, not his 13-year-old son, was driving the pickup truck that crossed into the oncoming lane and struck a van carrying New Mexico college golfers, killing nine people, and he had methamphetamine in his system, investigators said Thursday. 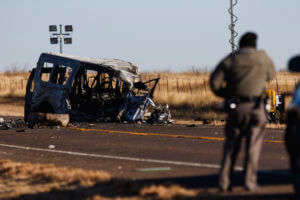 FILE – Texas Department of Public Safety Troopers look over the scene of a fatal car wreck early on March 16, 2022, half of a mile north of State Highway 115 on Farm-to-Market Road 1788 in Andrews County, Texas, where a pickup truck crossed the center line of a two-lane road in Andrews County, about 30 miles (50 kilometers) east of the New Mexico state line on Tuesday evening and crashed into a van carrying members of the University of the Southwest men’s and women’s golf teams, said Sgt. Steven Blanco of the Texas Department of Public Safety. The father of a 13-year-old boy, not the teen, was driving a pickup that struck the team’s van federal officials said on Thursday, July 14 . (Eli Hartman/Odessa American via AP, File)

The National Transportation Safety Board said two days after the March 15 collision in rural West Texas that its early findings suggested that the 13-year-old was driving the pickup that struck the van carrying University of the Southwest students and their coach back to Hobbs, New Mexico, from a golf tournament in Midland. But the NTSB said in a preliminary report released Thursday that DNA testing confirmed that the father, 38-year-old Henrich Siemens, was driving and that toxicological testing showed the presence of methamphetamine in Siemens’ blood.

“This was a very difficult investigation to determine some of the facts based on the catastrophic nature of the damage and the post-crash fire,” Robert Molloy, the NTSB’s director of highway safety, said at a news conference.

Siemens and his son died in the crash along with six members of the men’s and women’s golf teams and their coach, who was driving the van, which was towing a cargo trailer.

Molloy said they are still analyzing the toxicological report and that although they know methamphetamine can affect driver performance, it’s too early to say whether it was a contributing factor in the crash.

Investigators are still working to determine the probable cause of the crash, and Molloy said he didn’t expect a final report until next year.

The collision happened at about 8:17 p.m. in Andrews County, which is roughly 30 miles (50 kilometers) east of Texas’ border with New Mexico.

In the days after the crash, the NTSB had said that the truck’s left front tire blew before impact. But it said Thursday that so far, investigators haven’t found evidence of a loss in tire pressure or any other indicators that the tire failed. 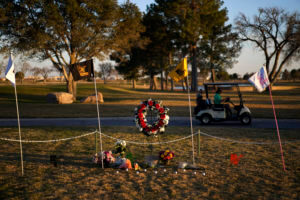 FILE – A golfer drives by a makeshift memorial at the Rockwind Community Links, on March 16, 2022, in Hobbs, New Mexico. The memorial was for student golfers and the coach of University of the Southwest killed in a crash in Texas. The father of a 13-year-old boy, not the teen, was driving a pickup that struck the team’s van federal officials said on Thursday, July 14. (AP Photo/John Locher, File)

The NTSB said the road they were traveling on consisted of a northbound lane and southbound lane. Near the crash site, the roadway was straight but there was no highway lighting.

The speed limit on the road was 75 mph (120 kph), but Molloy said they have not yet determined the vehicles’ speeds at the time of the crash.

Two other students who were in the van were seriously injured.

Most of the students were freshman who were getting their first taste of life away from home at the private Christian university with enrollment numbering in the hundreds. Those who knew James, the coach, said it had been his goal to be a head coach, and he was excited to be there.

The crash was the latest tragedy for the Siemens family, who lived in Seminole, Texas, a rural community of around 7,500 people, some of whom first relocated to the area in the 1970s with other Mennonite families who started farming and ranching operations. Community members had rallied around Siemens and his wife months earlier when a fire that started in the kitchen destroyed the home where they had lived for a decade.