WASHINGTON (AP) — The FBI investigation into top-secret government information discovered at Mar-a-Lago is zeroing in on the question of whether former President Donald Trump’s team criminally obstructed the probe. A new document alleges that government records had been concealed and removed and that law enforcement officials were misled about what was still there.

The allegation does not necessarily mean that Trump or anyone else will ultimately face charges. But it could pose the most direct legal threat to either Trump and those in his orbit, in part because the Justice Department has historically regarded obstruction as an aggravating factor that tilts in favor of bringing charges in investigations involving the mishandling of classified information. 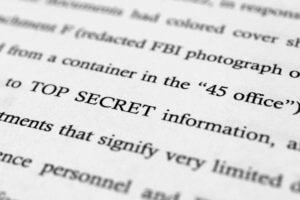 “It goes to the heart of trying to suborn the very integrity of our criminal justice system,” said David Laufman, who once oversaw the same Justice Department counterintelligence section now responsible for the Mar-a-Lago investigation.

The latest Justice Department motion in the case is focused less on the removal last year of classified information from the White House to Mar-a-Lago and more on the events of this past spring. That’s when law enforcement officials tried — unsuccessfully — to get all documents back and were assured, falsely, that everything had been accounted for after a “diligent search.”

The Justice Department issued a grand jury subpoena in May for the records, and officials visited Mar-a-Lago on June 3 to collect them. When they got there, Tuesday’s department document says, they were handed by a Trump lawyer a “single Redweld envelope, double-wrapped in tape” containing documents.

A custodian for the records presented a sworn certification to the officials saying that “any and all responsive documents” to the subpoena had been located and produced. A Trump lawyer said that all records that had come from the White House had been held in one location — a storage room — and that there were none in any private space or other spot at the house.

But the FBI came to doubt the truth of those statements and obtained a search warrant to return on Aug. 8. 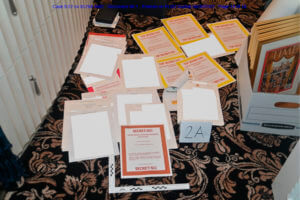 This image contained in a court filing by the Department of Justice on Aug. 30, 2022, and redacted by in part by the FBI, shows a photo of documents seized during the Aug. 8 search by the FBI of former President Donald Trump’s Mar-a-Lago estate in Florida. The Justice Department says it has uncovered efforts to obstruct its investigation into the discovery of classified records at former President Donald Trump’s Florida estate. (Department of Justice via AP)

Officials had “developed evidence that government records were likely concealed and removed from the Storage Room and that efforts were likely taken to obstruct the government’s investigation,” the new Justice Department filing says.

In their August search, agents found classified documents not only in the storage room but also in the former president’s office — including three classified documents in office desks, according to the Justice Department. In some instances, the agents and attorneys conducting the review of seized documents required additional clearances since the material was so highly classified.

“That the FBI, in a matter of hours, recovered twice as many documents with classification markings as the ‘diligent search’ that the former president’s counsel and other representatives had weeks to perform calls into serious question the representations made in the June 3 certification and casts doubt on the extent of cooperation in this matter,” the document states.

In a court filing Wednesday night, lawyers for Trump decried the search as having taken place in “the midst of the standard give-and-take” between a former president and the National Archives and Records Administration over presidential records. It said the department had “gratuitously” made public certain information, including a photograph of classified documents seized from the home.

The Justice Department has stated in court filings that, besides investigating crimes related to the mishandling of national defense information and other documents, it is also looking into whether anyone committed obstruction. It is not clear from Tuesday’s filing how much of that inquiry might center on Trump, who has repeatedly insisted that his team was cooperative with the FBI, as opposed to any of his lawyers or representatives who were directly involved in making the representations to the department. It’s also unclear what role Trump himself had in those representations. 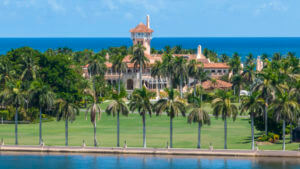 This is an aerial view of former President Donald Trump’s Mar-a-Lago club in Palm Beach, Fla., Wednesday Aug. 31, 2022. The Justice Department says classified documents were “likely concealed and removed” from former President Donald Trump’s Florida estate as part of an effort to obstruct the federal investigation into the discovery of the government records. (AP Photo/Steve Helber)

Obstruction matters because it’s one of the factors investigators look for in weighing whether to bring charges. For instance, in his July 2016 announcement that the FBI would not be recommending criminal charges against Hillary Clinton in an investigation involving handling of her emails, FBI Director James Comey cited the absence of obstruction as one of the reasons.

When the Justice Department charged former CIA Director David Petraeus in 2015 with sharing classified information with his biographer, it made a point of including in court documents details about false statements prosecutors said he made during an FBI interview.

It is not the first time that an obstruction investigation has surfaced in connection with Trump. Special Counsel Robert Mueller investigated whether Trump had obstructed an inquiry into whether his 2016 presidential campaign had colluded with Russia, and though Mueller did not recommend charges against the then-sitting president, he also pointedly declined to exonerate him.

In the current case, federal investigators are likely evaluating why Trump representatives provided statements about the status of classified information at Mar-a-Lago that proved easily contradicted by the evidence, as well as which individuals were involved in removing boxes and why.

Sarah Krissoff, a New York lawyer and former federal prosecutor, said the detailed information in this week’s filing tells its own tale.

“Reading between the lines of what they were saying here, it suggests that they had very direct information from a source regarding the location of classified documents within Mar-a-Lago and essentially the concealment of, or lack of cooperation with, the prior efforts to recover those documents,” she said.

The purpose of the Tuesday night filing was to oppose a request from the Trump legal team for a special master to review the documents seized during this month’s search and to return to him certain seized property. U.S. District Judge Aileen Cannon is to hear arguments on the matter Thursday.

Trump’s lawyers said in a Wednesday night filing that a special master was needed in the name of fairness, saying that “left unchecked, the DOJ will impugn, leak, and publicize selective aspects of their investigation.”

Cannon on Saturday said it was her “preliminary intent” to appoint such a person but also gave the Justice Department an opportunity to respond.

On Monday, the department said it had already completed its review of potentially privileged documents and identified a “limited set of materials that potentially contain attorney-client privileged information.” It said Tuesday that a special master was therefore unnecessary and that the presidential records that were taken from the home do not belong to Trump. 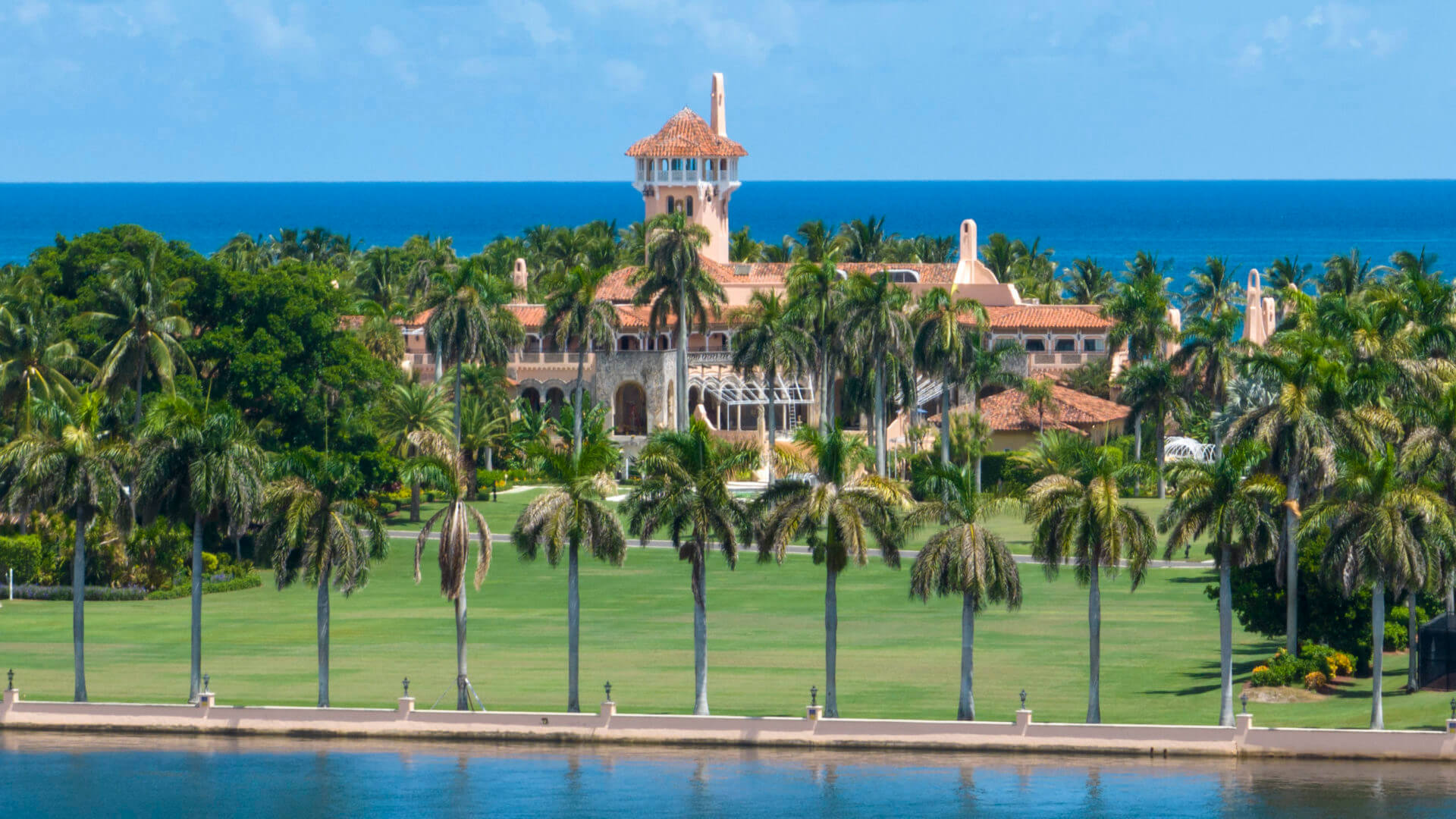 This is an aerial view of former President Donald Trump's Mar-a-Lago club in Palm Beach, Fla., Wednesday Aug. 31, 2022. The Justice Department says classified documents were "likely concealed and removed" from former President Donald Trump's Florida estate as part of an effort to obstruct the federal investigation into the discovery of the government records. (AP Photo/Steve Helber)
MORE NEWS