SUNRISE, Fla. (AP) — A South Florida police sergeant who was recorded grabbing a colleague by the neck when she tried to deescalate a situation involving a suspect is facing four criminal charges, prosecutors announced Thursday. 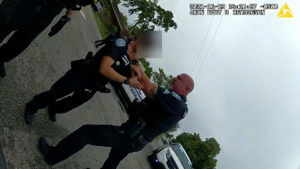 This image from bodycam video shows Sunrise police Sgt. Christopher Pullease grabbing a colleague by the neck when she tried to deescalate a situation involving a suspect. (Sunrise Police Department)

RELATED: Sergeant who grabbed officer by throat under investigation

The 21-year veteran of the department had been placed on desk duty last November, five days after the altercation with the other officer. The suspect had been handcuffed and placed into a cruiser when Pullease pointed pepper spray at him, officials said.

The unidentified female officer ran to Pullease and pulled him by the belt away from the suspect, the video showed. Pullease turned and put his left hand on her throat before pushing her back toward another police cruiser.

The investigation was conducted by Sunrise Police Department and the Broward State Attorney’s Office.