GEORGETOWN, Ohio (SCRIPPS) — An Ohio couple who stand accused of starving and abusing an 11-year-old girl in their care will face a jury this year.

Margaret and Charles Breeze sat opposite each other in Brown County Common Pleas Judge Scott Gusweiler’s courtroom Wednesday afternoon. They didn’t say a word, although they did lock eyes briefly a few times.

Their attorneys told the judge they will go ahead with a jury trial later in the year.

Investigators in 2019 charged Charles and Margaret Breeze with two counts each of kidnapping, two counts each of endangering children, and one count each of felonious assault, according to the Brown County News Democrat. An additional tampering with evidence charge was added in January 2020.

Charles Breeze has spent the last 15 months in custody at a medical facility due to a health condition, while Margaret has stayed in the Brown County Jail in Georgetown since her November 2019 arrest. Charles was arrested a few weeks later.

A bill of particulars filed in late February 2020 gave a glimpse into potential evidence and witnesses in the state’s case against them, including 20 staffers from Cincinnati Children’s Hospital Medical Center who could be called to testify. Court documents allege that the girl was hospitalized for 10 days after the Breezes withheld food from her as punishment and locked her in a separate trailer behind their home.

Documents also indicated that a home school teacher in 2019 heard the girl say she was hungry and alerted authorities. Investigators would later say the Breezes watched her with a camera, beat her, made her wear a diaper, and fed her one plate of rice per day.

She weighed 47 pounds and was in liver failure when investigators rescued her, doctors said. 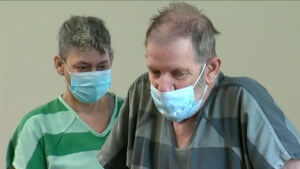 abusing 11-year-old girl will have jury trial
Margaret and Charles Breeze sat opposite each other in Brown County Common Pleas Judge Scott Gusweiler’s courtroom Wednesday, March 10, 2021, when their attorneys said they would go forward with a jury trial. (WCPO)

The Breezes’ attorneys argue the couple were following recommendations by the Brown County Department of Job and Family Services.

A WCPO investigation shortly after the Breezes’ arrests showed that Margaret filed for guardianship of the girl in Bracken County, Kentucky, six years prior to the accusations. She claimed in a petition that she was a foster parent certified in Ohio and the girl’s third cousin. She also claimed that a pediatrician had recommended she have guardianship because the girl had “severe behavioral problems.” The girl had been living with her mother in Augusta, Kentucky.

A woman who told WCPO in 2019 that she was Charles’ sister, Joie Jodrey, said she reported that her brother was abusing a little girl in Brown County in 2017 – two years before officials rescued the girl.

This story was originally published by Courtney Francisco of WCPO in Cincinnati, Ohio.