CINCINNATI (WCPO) — An Ohio man is accused of giving amphetamines to a 6-month-old monkey.

Adam Kores, 34, was arrested a month after an investigation by the Hamilton County’s dog warden led to the seizure of the capuchin monkey named Neo on Feb. 7.

Kordes, through his attorney, denies the allegations and is trying to get the monkey back. Attorney Lisa Rabanus said the case is the result of a flawed investigation by Cincinnati Animal Care, which handles animal cruelty complaints under its contract with Hamilton County.

Rabanus claims the nonprofit’s dog-warden staff improperly confiscated Neo and used the wrong Ohio statute to charge Kordes with a felony and two misdemeanors. Instead of using a statute that applies to wild animals, deputy dog wardens charged Kordes under a companion animal law that applies to dogs and cats.

“They charged him three different ways for the same incident and all of them were wrong,” Rabanus said. “The capuchin monkey is a wild animal. Under that, the worst charge he could face is a misdemeanor-2 for cruelty … that’s basic law enforcement and they can’t even get that right.”

Rabanus said she is considering a lawsuit on behalf of Kordes, who spent four days in jail following his arrest and is anxious to see Neo again.

“He’s been without this monkey for over a month and there’s no basis for it,” Rabanus said.

But that’s not how they see it at Misfitland Monkey Rescue in Clermont County.

“That monkey clearly, clearly beyond any doubt, needed help,” said Teresa Bullock, who owns the roughly 300-acre farm that bills itself as a “forever home” to domesticated primates.

Bullock said Kordes contacted her in early February because Neo was sick. Bullock said she was concerned about that because Kordes previously owned another monkey, named Moe, who died in his care. So, when Bullock responded to Kordes’ apartment on Feb. 6, she had a Florida veterinarian on WhatsApp witnessing the visit.

Three days later, Deputy Dog Warden Christian Davis filed an affidavit in support of a search warrant to seize the animal for cruelty/neglect. 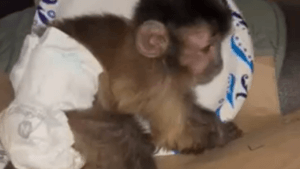 This photo provided by the lawyer for Adam Kordes shows Neo, a capuchin monkey that was allegedly given drugs by Kordes. (WCPO)

“Deputies received a call from Doctor Jodie Thannum, stating that Adam Kordes was harboring a capuchin monkey that was being given narcotics, such as adult amounts of Xanax and or cocaine,” Davis wrote.

Court records show the felony charge was ignored by a Hamilton County grand jury Friday, but two misdemeanor charges are still pending against him.

The Hamilton County Prosecutor’s office declined to say whether the felony case could be re-submitted to a grand jury under a different statute.

Rabanus said Kordes shot video on Feb. 7 – the day the animal was confiscated – showing Neo was active and healthy. If the case proceeds with new cruelty charges, Rabanus plans to challenge the blood and urine tests based on when the samples were taken and whether deputies can prove the amphetamines came from Kordes.

Although he was cleared of the felony cruelty charge, Kordes was indicted on a third-degree felony charge of having a weapon under disability.

When Cincinnati police arrested Kordes on the animal cruelty charge, they found a 12-gauge shotgun in his apartment, according to court records. He’s not allowed to have such a weapon because he was found mentally incompetent to stand trial in a 2017 court case in which he was charged with aggravated vehicular homicide after an auto accident that left his passenger dead and Kordes with head injuries.

Rabanus hopes to get the weapon charge dismissed by challenging the original search warrant that led to Neo’s confiscation and Kordes’ arrest. She said the gun belonged to Kordes’ father and Kordes didn’t know it was there until police found it.

Bullock was disappointed to learn the grand jury chose not to indict Kordes on the cruelty charge.

“At the absolute minimum, he needs an order saying he can’t have no more” monkeys, Bullock said. “I mean he clearly cannot take care of them.”

This story was originally published March 12 by WCPO in Cincinnati, an E.W. Scripps Company.