PORTSMOUTH, Va. (WTKR) – New information has been revealed about a disturbing case out of Portsmouth, Virginia. Rocky Mugynei and Talaysia Nelson, who were both 18-years-old when their infant son died in February 2021, each face charges of second-degree murder and child abuse related to the boy’s death.

Last year, News 3 revealed through court documents that an autopsy showed the boy had bruises on most of his body, including his neck, head and leg, scratches on his arms and cheek, and two separate lacerations on his liver. 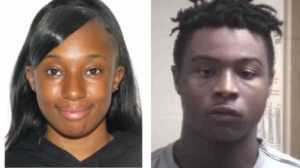 Mugynei reportedly told detectives he frequently rough-housed with his son, and that he had been “play wrestling” when he performed an “elbow drop” style move on the boy the day before he died.

Each was granted a bond shortly after their arrests.

News 3 Investigates uncovered new information in court documents that led to both of their bonds being revoked.

In March 2021, Mugynei was granted a $25,000 bond with conditions including not having any contact with Nelson, or any kids under 5 years old, including his own.

This past March, Mugynei brought his child to the Children’s Hospital of the King’s Daughters.

Court documents went on to say the Commonwealth was notified by Norfolk Child Protective Services (CPS) that Mugynei had consistent contact with Nelson and his child.

Regarding Nelson, in March 2022, she was granted a $5,000 bond with conditions of not having any contact with Mugynei and living at her home in Newport News.

Along with the correspondence from Norfolk CPS detailing contact between Mugynei and Nelson, court documents for Nelson went on to say she admitted to extensive contact with Mugynei.

She also revealed that she no longer lived in Newport News and planned to live at Mugynei’s home in Portsmouth indefinitely.

Court documents also revealed several calls were overheard between Mugynei and Nelson. Nelson planned to move from Virginia to Las Vegas when Mugynei was released on bond and, at the time, she was 21 weeks pregnant with Mugynei’s child.

Nelson’s bond was revoked in June.

Both parents are now back in custody.

Mugynei’s trial started Monday. News 3 reached out to one of his defense attorneys, who had no comment at this time on his trial or what the court documents News 3 obtained revealed.

Meanwhile, Nelson’s trial is expected to start in November.

This story was originally published Sept. 27, 2022, by WTKR in Norfolk, VA, an E.W. Scripps Company.