LAGUNA WOODS, Calif. (AP) — A man opened fire during a lunch reception at a Southern California church, killing one person and wounding five senior citizens before a pastor hit the gunman on the head with a chair and parishioners hog-tied him with electrical cords.

Jerry Chen had just stepped into the kitchen of his church’s fellowship hall around 1:30 p.m. Sunday when he heard the gunshots. 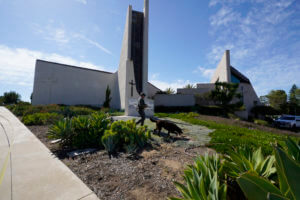 A K-9 unit checks the grounds of Geneva Presbyterian Church in Laguna Woods, Calif., Sunday, May 15, 2022, after a fatal shooting. (AP Photo/Damian Dovarganes)

Chen, 72, a longtime congregant at Irvine Taiwanese Presbyterian Church in Laguna Woods, peeked around the corner and saw church members screaming, running and ducking under tables.

Officials said the shooting ended after the gunman killed one man and wounded five senior citizens before worshippers hog-tied his legs with an electrical cord until deputies arrived. Four of the five people wounded suffered critical gunshot injuries.

While a motive for the shooting at the Geneva Presbyterian Church in the city of Laguna Woods was not immediately disclosed, investigators don’t believe the gunman — an Asian man in his 60s whose name was not immediately released — lives in the community.

Chen, who called 911 from the church’s parking lot, said he was in such a state of shock that he was unable to tell the operator his location.

“I had to ask someone else for the address,” he said.

Chen said a group of about 40 congregants had gathered in the fellowship hall for a luncheon after a morning service to welcome their former Pastor Billy Chang, who had served the church for 20 years and was a beloved and respected community member. Chang moved back to Taiwan two years ago. This was his first time back stateside, Chen said.

That was when he heard the gunshots and ran out.

Soon afterward, Chen said he heard the details of what happened inside from others who came out. Fellow congregants told Chen that when the gunman stopped to reload, Pastor Chang hit him on the head with a chair while others moved quickly to grab his gun. They then subdued him and tied him up, Chen said.

“It was amazing how brave (Chang) and the others were,” he said. “This is just so sad. I never, ever thought something like this would happen in my church, in my community.”

Most of the church’s members are elderly, highly educated Taiwanese immigrants, Chen said. 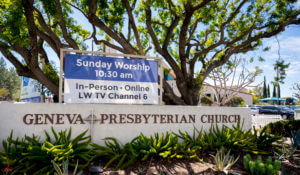 A sign for the Geneva Presbyterian Church in Laguna Woods, Calif., is seen on Sunday, May 15, 2022 after a fatal shooting. (Leonard Ortiz/The Orange County Register via AP)

“We’re mostly retirees and the average age of our church is 80,” he said.

“That group of churchgoers displayed what we believe is exceptional heroism and bravery in intervening to stop the suspect. They undoubtedly prevented additional injuries and fatalities,” Hallock said. “I think it’s safe to say that had people not intervened, it could have been much worse.”

The shooting came a day after an 18-year-old man shot and killed 10 people at a supermarket in Buffalo, New York.

Laguna Woods was built as a senior living community and later became a city. More than 80% of residents in the city of 18,000 people about 50 miles (80 kilometers) southeast of Los Angeles are at least 65. The incident occurred in an area with a cluster of houses of worship, including Catholic, Lutheran and Methodist churches and a Jewish synagogue.

The investigation was in its early stages, Hallock said. He said the many unanswered questions include whether the assailant attended the church service, if he was known to church members and how many shots were fired.

The majority of those inside the church at the time were believed to be of Taiwanese descent, said Carrie Braun, a sheriff’s spokesperson.

Those wounded by gunshots included four Asian men, ages 66, 75, 82 and 92, and an 86-year-old Asian woman, the sheriff’s department said. Authorities originally said only four of the five surviving victims had been shot.

Officials did not immediately disclose any information about the alleged shooter.

The afternoon lunch reception was to honor a former pastor of the Taiwanese congregation, according to a statement from the Presbytery of Los Ranchos, a church administrative body. 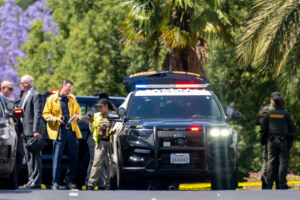 Investigators gather outside the Geneva Presbyterian Church in Laguna Woods, Calif., on Sunday, May 15, 2022 after a fatal shooting. (Leonard Ortiz/The Orange County Register via AP)

“Please keep the leadership of the Taiwanese congregation and Geneva in your prayers as they care for the those traumatized by this shooting,” the presbytery’s Tom Cramer said in a statement on Facebook.

Gov. Gavin Newsom’s office said on Twitter that he was closely monitoring the situation.

“No one should have to fear going to their place of worship. Our thoughts are with the victims, community, and all those impacted by this tragic event,” the tweet said.

On its website, Geneva Presbyterian Church describes its mission as “to remember, tell, and live the way of Jesus by being just, kind, and humble.”

“All are welcome here. Really, we mean that! … Geneva aspires to be an inclusive congregation worshipping, learning, connecting, giving and serving together.”

Violence in houses of worship includes the deadliest shooting inside a church, which occurred in 2017 in Sutherland Springs, Texas, when a gunman opened fire during a Sunday service at First Baptist Church and killed more than two dozen people.

In 2015, Dylann Roof fired dozens of bullets during the closing prayer of a 2015 Bible study session at Charleston’s Mother Emanuel AME Church in South Carolina. Nine members of the Black congregation were killed in the racist violence and Roof became the first person in the U.S. sentenced to death for a federal hate crime. His appeal remains before the Supreme Court.

This story has been corrected to show that Pastor Billy Chang has not retired.

Associated Press religion coverage receives support through the AP’s collaboration with The Conversation US, with funding from Lilly Endowment Inc. The AP is solely responsible for this content. 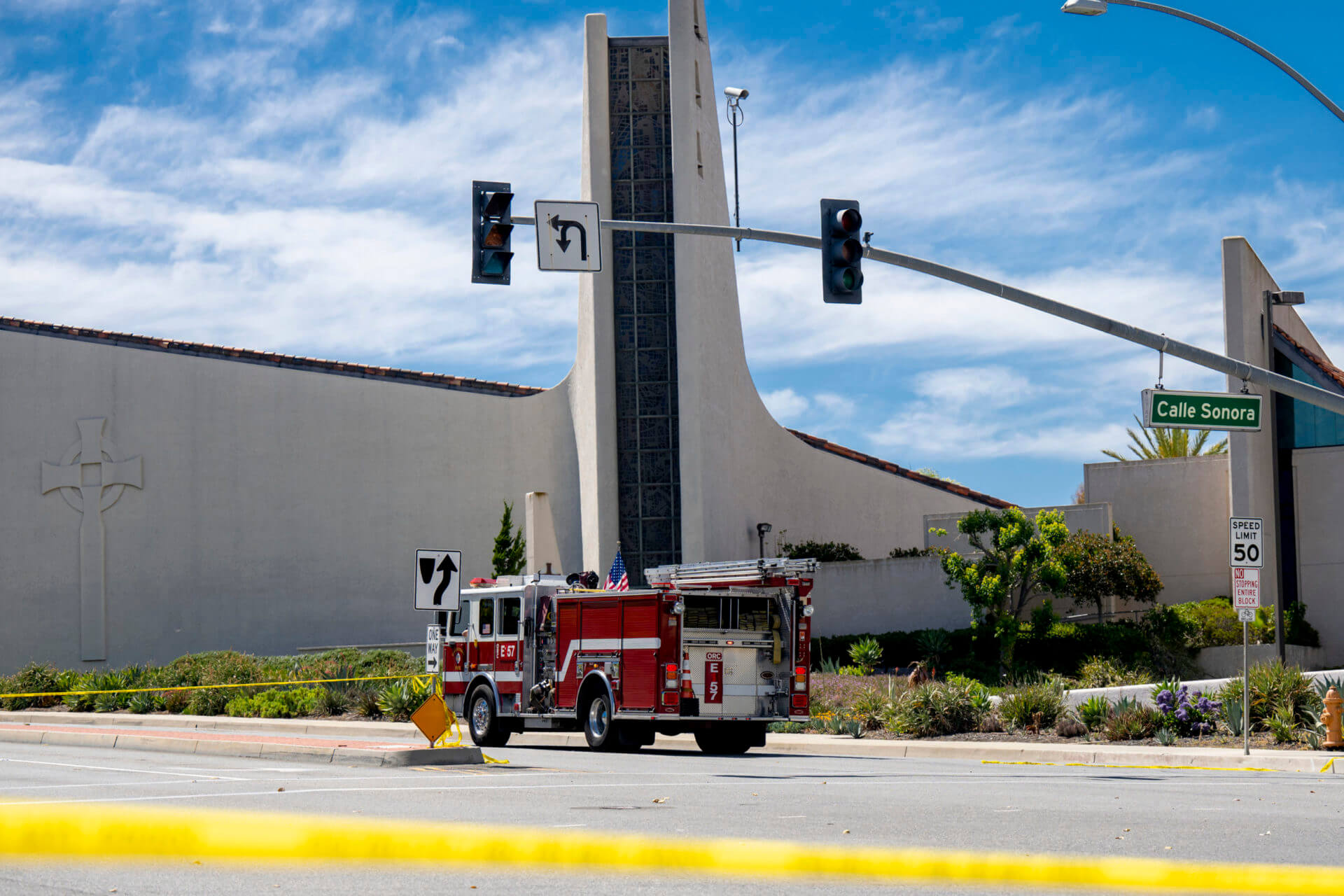 A firetruck is seen outside the Geneva Presbyterian Church in Laguna Woods, Calif., on Sunday, May 15, 2022 after a fatal shooting. (Leonard Ortiz/The Orange County Register via AP)
MORE NEWS