BOSTON (AP) — A founder of a now-defunct Massachusetts pharmaceutical facility responsible for a deadly meningitis outbreak will spend 14 and a half years behind bars, a federal judge ruled Wednesday, lengthening his initial punishment of nine years that was tossed out by an appeals court.

Barry Cadden, who was president and co-owner of the now-closed New England Compounding Center, showed little emotion as he was sentenced for a second time after being convicted of fraud and other crimes in the 2012 outbreak that killed 100 people and sickened hundreds of others. 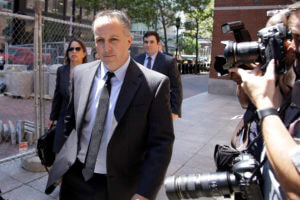 FILE – In this June 26, 2017, file photo, Barry Cadden, president of the New England Compounding Center, followed by members of his legal team, arrives at the federal courthouse for his sentencing in Boston. Cadden, founder of a now-defunct Massachusetts pharmaceutical facility responsible for a deadly meningitis outbreak, will spend 14 and a half years behind bars, a federal judge ruled Wednesday, July 7, 2021, lengthening his initial punishment of nine years that was tossed out by an appeals court. (AP Photo/Stephan Savoia, File)

The 1st U.S. Circuit Court of Appeals vacated Cadden’s sentence last year and ordered the judge to re-examine whether certain enhancements in sentencing guidelines that call for stiffer punishments should apply.

The outbreak was traced to mold-tainted steroid injections produced by the company in Framingham, located about 20 miles (32 kilometers) west of Boston. The scandal threw a spotlight on compounding pharmacies, which differ from ordinary drugstores in that they custom mix medications and supply them directly to hospitals and doctors.

“Mr. Cadden ran an operation full of fraud and opportunism that was so risky to patients and he profited well off of it,” said Assistant U.S. Attorney Amanda Strachan, chief of the health care fraud unit in Massachusetts’ federal prosecutors office. “He knew the dangers he was creating for patients in this country every time he got behind the wheel at NECC.”

Strachan read aloud a letter written from the mother of a woman who continues to suffer serious health problems and is confined to bed 75% of the time as a result of receiving the mold-tainted injection. Laura Brinton’s mother implored the judge to impose a longer punishment, detailing the agony that her daughter and others have endured.

“My beautiful, educated, gracious, successful daughter has asked me many times why we didn’t let her die,” Brinton’s mother wrote in the letter. “I have told her we all hoped that living would bring with it restored health. How wrong we were.”

After lengthy trials in Boston’s federal court, Cadden and pharmacist Glenn Chin, who oversaw the facility’s so-called clean rooms, were both acquitted of second-degree murder under under the federal racketeering law but were found guilty of fraud, racketeering and other crimes.

They were both subsequently charged with second-degree murder in Michigan state court, where the cases are still pending.

Cadden’s lawyers had tried to push the blame onto Chin and argue Cadden had every reason to believe the drugs were sterile. Chin pointed the finger back at Cadden, arguing that the co-owner was the one calling the shots.

Cadden tearfully apologized to the victims during his first sentencing hearing in 2017, saying “I am sorry for the whole range of suffering that resulted from my company’s drugs.”

Cadden’s attorney acknowledged that the victims “have endured great suffering and great harm,” but noted that Cadden was acquitted of the most serious charges against him. Defense attorney Bruce Singal said Cadden’s original nine-year sentence was more than fair for a fraud conviction.

“From a legal standpoint, I do not believe that it is appropriate that this court’s sentence reflect the deaths and serious injuries that resulted because they have no relationship to the offenses of conviction,” he said.

The appeals court also ordered a new sentence for Chin, who got eight years behind bars in 2018. Chin is expected to be resentenced on Thursday.