LOS ANGELES (AP) — The leader of a Philippines-based church was charged with having sex with women and underage girls who faced threats of abuse and “eternal damnation” unless they catered to the self-proclaimed “son of God,” federal prosecutors announced Thursday.

Apollo Carreon Quiboloy and two of his top administrators are among nine people named in a superseding indictment returned by a federal grand jury last week and unsealed Thursday. The indictment includes three Los Angeles-based administrators of Quiboloy’s church who were charged last year. The new indictment also names a church administrator in Hawaii. 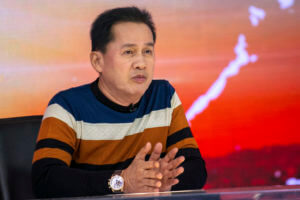 FILE – Apollo Carreon Quiboloy appears on his talk show on May 23, 2016, in Davao City, southern Philippines. Quiboloy, the leader of the Philippines-based Kingdom of Jesus Christ church, was charged with having sex with women and underage girls federal prosecutors announced Thursday, Nov. 17, 2021. (AP Photo.File)

Quiboloy, 71, is head of the Kingdom of Jesus Christ church, founded in 1985. The church claims to have 6 million members in about 200 countries. Its United States headquarters is in the Van Nuys area of Los Angeles.

The church backed the 2016 candidacy of Philippine President Rodrigo Duterte, a close friend of Quiboloy. Duterte used the group’s radio and TV program in southern Davao city to express his views on issues way back when he was mayor of the southern port city.

Quiboloy claims to be “the appointed son of God” and in 2019 claimed he stopped a major earthquake from hitting the southern Philippines.

Quiboloy is believed to be in the Philippines, where his camp said that he and the other accused church leaders were ready to face legal issues although they did not answer the charges in a statement posted on his group’s news website, SMNI News Channel.

“We are confident and ready to face whatever is hurled against pastor Quiboloy and the kingdom leaders,” said the statement, which was attributed to an unnamed church legal counsel and accused “dissidents” of bringing up the charges to destroy Quiboloy. “We trust the process of justice and we certainly expect the truth to prevail and the kingdom ministry will continue to prosper.”

Philippine Justice Secretary Menardo Guevarra said Quiboloy was not facing any complaint in his country related to the U.S. charges. He said without elaborating that a separate complaint for rape was filed against Quiboloy in Davao city last year but it has been dismissed but the decision was on appeal before the Department of Justice in Manila. The dismissed complaint included charges of child abuse, trafficking in persons through forced labor and trafficking in persons through sexual abuse, Guevarra told reporters in Manila.

The indictment accuses Quiboloy and others of recruiting women and girls, typically 12 to 25 years old, as “pastorals” who cooked his meals, cleaned his houses, massaged him and traveled with him around the world. Some also had sex with Quiboloy on scheduled “night duty,” including some minors such as a 15-year-old girl, according to the indictment. 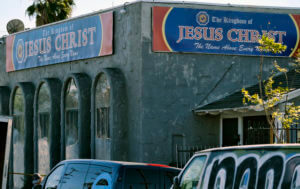 The front of the Kingdom of Jesus Christ Church is seen in the Van Nuys section of Los Angeles on Jan. 29, 2020. Apollo Carreon Quiboloy, the leader of the Philippines-based church was charged with having sex with women and underage girls who faced threats of abuse and “eternal damnation” unless they catered to the self-proclaimed “son of God,” federal prosecutors announced Thursday, Nov. 17, 2021. (AP Photo/Richard Vogel,File)

They were coerced into “night duty” under “the threat of physical and verbal abuse and eternal damnation,” according to the indictment.

Quiboloy and the others also are accused of bringing church members to the U.S. with fraudulently obtained student visas or sham marriages to solicit donations for the church’s charity, based in the Los Angeles suburb of Glendale.

Workers who managed to escape from the church told the FBI that they worked year-round and were beaten and psychologically abused if they didn’t make daily quotas, according to court documents from the previous indictment. Some described having to live in cars at truck stops.

The money for the nonprofit Children’s Joy Foundation USA was supposed to benefit poor children in the Philippines. But prosecutors said most of it financed church operations and the lavish lifestyle of Quiboloy and other church leaders.

At least $20 million was sent back to the church in the Philippines between 2014 and 2019, according to an FBI affidavit filed with the previous indictment.