NEW YORK (AP) — The Philadelphia Phillies have sued the New York company that created the Phanatic mascot to prevent the green furry fan favorite from becoming a free agent.

In a complaint filed Friday in U.S. District Court in Manhattan, the team alleged Harrison/Erickson threatened to terminate the Phillies’ rights to the Phanatic next year and “make the Phanatic a free agent” unless the team renegotiated its 1984 agreement to acquire the mascot’s rights. 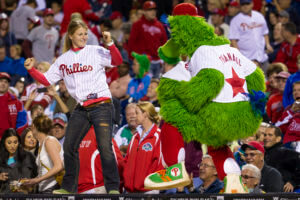 File-This Sept. 16, 2013. file photo shows the Phillies Phanatic dancing with a fan on the dugout during the eighth inning of a baseball game in Philadelphia. (AP Photo/Chris Szagola, File)

The Phillies asked for declaratory judgments affirming their rights and sued H/E claiming unjust enrichment and breach of good faith.

A message left Saturday on the recorder that answered the company’s telephone was not immediately returned.

The team said it contracted with Harrison/Erickson in 1978 at the behest of then-Phillies executive vice president Bill Giles to develop the mascot for $3,900 plus expenses, which turned out to be about $2,000. The Phillies said they reached an agreement to cover promotional items, paid Harrison/Erickson more than $100,000 in royalties and were sued by the company in 1979. As part of the settlement later that year, the Phillies said they made a $115,000 one-time payment and agreed to pay $5,000 annually, increasing by $1,000 per year.

The Phillies said they reached an agreement with H/E in 1984 to buy all rights to the “artistic sculpture known as the ‘Phillie Phanatic'” for $215,000.

The team said Harrison/Erickson lawyers sent a letter to the Phillies on June 1 last year claiming H/E had the right to terminate the 1984 agreement and saying absent a new deal the Phillies would not be able to use the Phanatic after June 15, 2020.