PHOENIX (KNXV) — A man accused of shooting and critically wounding a Phoenix police officer was on probation when the offense occurred, according to a prosecutor.

The officer was investigating a report of a vehicle driving erratically and “doing donuts” near 19th Avenue and Camelback Road. Police said the suspect, identified as 24-year-old Essa Williams, was found hiding on the patio of an apartment before he pulled out a gun and shot at Ofc. Moldovan. 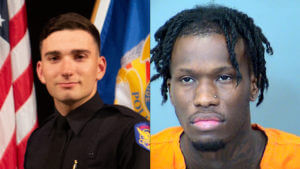 During a court appearance Tuesday night, a prosecutor told a judge that Essa Williams had shot Ofc. Moldovan multiple times and “continued shooting” after the young officer fell to the ground.

Essa Williams then reportedly fought backup officers when they tried to take him into custody. Following the shooting,  Essa Williams was taken into police custody without further incident. Police said officers did not fire their weapons during the situation.

The prosecutor added Essa Williams has nine prior felonies committed on four separate incidents. He was on probation when the offenses were committed, according to the prosecutor.

Essa Williams is facing multiple charges that include attempted first-degree murder of a law enforcement officer, possession of a weapon by a prohibited person, aggravated assault, and resisting arrest.

According to Chief Williams, Moldovan joined the police department a year and a half earlier and recently became a solo officer. He is also a newlywed.

“Tyler is doing exactly what we expect our police officers to do, and that’s fight, and that’s continue to fight,” Chief Williams said.

Williams’ next court appearance is scheduled for December 21 at 1:30 p.m.

This story was originally published Dec. 14, 2021, by KNXV in Phoenix, an E.W. Scripps Company.