BALTIMORE (WMAR) — A Baltimore mother has confessed to murdering her two young children, according to police.

The decomposing bodies of 6-year-old Da’Neria Thomas and her 8-year-old brother Davin Jr. were discovered Tuesday afternoon inside a Beechfield neighborhood apartment on Coventry Road.

Officers were called to the location by a neighbor who reported a foul odor. 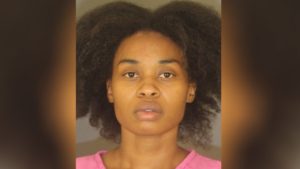 Early in the investigation homicide detectives considered their mother, 28-year-old Jamerria Hall, as a person of interest.

After hours of trying to track Hall down, investigators finally interviewed her Wednesday morning at which point she confessed.

Harrison said detectives are still working to piece together how and why Hall carried out the killings.

“Davin and Da’Neria should be making new friends, they should be showing off their new school shoes, they should be really starting to grow into who they are as a person, inching closer and closer to their full potential, and we should be celebrating their promise,” said Mayor Brandon Scott. “Instead we’re here today talking about their unfortunate death. I’ll be honest, I didn’t sleep much last night.”

Back in 2018 Hall and her two children were found at a local hospital after being reported missing.

Just before that, Hall reportedly set fire inside a home with Da’Neria and Davin present.

She was later convicted and sentenced to a year in jail in connection to that case.

It’s unclear if Child Protective Services took any action following the incident, but online court records show a 2019 custody hearing between Hall and the kids father.

Harrison added that Hall’s child custody history would be reviewed as part of their investigation.

Hall remains in police custody with formal charges expected to be filed.

This story was originally published August 25, 2021 by WMAR in Baltimore, an E.W. Scripps Company.