DENVER (AP) — A gunman who went on a shooting rampage in several locations around the Denver area, killing five people and wounding two, targeted his victims based on previous personal and business dealings, authorities said.

Lyndon James McLeod, 47, was also killed Monday night after he shot a police officer who confronted him in a busy shopping district in the Denver suburb of Lakewood. The officer managed to fire back at McLeod, killing him, Lakewood police spokesperson John Romero said Tuesday. 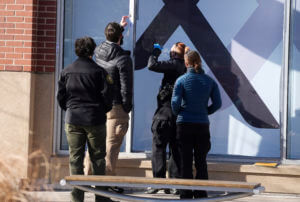 Investigators recover evidence from a window frame outside an Xfinity store Tuesday, Dec. 28, 2021, in Lakewood, Colo., one of the scenes of a shooting spree that left several people dead—including the suspected shooter Monday evening—and left a few more people wounded. The spree spread from the core of Denver to the western suburb of Lakewood where the suspect was shot and killed by police near a busy intersection in a bustling shopping district. (AP Photo/David Zalubowski)

Matt Clark, commander of the Denver Police Department’s Major Crimes Division, said the gunman knew most of his victims but not the last person he shot — a clerk in a hotel in Lakewood’s Belmar shopping area. Sarah Steck, 28, who died of her injuries Tuesday, was apparently targeted because of a dispute with the hotel, not with her, Clark said.

McLeod once owned a business in Denver called Flat Black Ink Corp. at an address that is now World Tattoo Studio, according to records from the Colorado Secretary of State’s Office. A man who answered the phone at World Tattoo Studio hung up after he was asked about McLeod on Tuesday evening.

The first shooting took place at a tattoo shop less than a mile (1.6 kilometers) from that address. Four of the victims, including three who died, were shot at two tattoo shops in the Denver area.

Denver Police Chief Paul Pazen said during a news conference that McLeod was on the radar of law enforcement and had been investigated in both 2020 and 2021. He declined to say what McLeod was investigated for but said charges were not filed against him.

The shootings started around 5:30 p.m. in central Denver along Broadway, a busy street lined with shops, bars and restaurants, where two women were killed and a man was injured but expected to survive, police said. Soon after, McLeod forced his way into a home that also housed a business nearby, pursued the occupants through the building and fired shots, but no one was injured, Clark said. Then a man was shot and killed in a home near Denver’s Cheesman Park, he said.

Later, Denver police chased the vehicle believed to have been involved in the shootings, and an officer exchanged gunfire with McLeod, Clark said. McLeod was able to get away, fleeing into Lakewood, after gunfire disabled the officer’s cruiser, he said.

Just before 6 p.m., the Lakewood Police Department received a report of shots fired at the Lucky 13 tattoo shop. Danny Schofield, 38, was killed there, Romero said.

When officers spotted the car suspected of being involved in the shooting at the Belmar shopping area — where shops line sidewalks in a modern version of a downtown — McLeod opened fire and officers shot back, Romero said. He ran away and allegedly threatened some people in a restaurant with a gun before going to the Hyatt House hotel, where he spoke briefly with Steck, the clerk, before shooting her, he said. 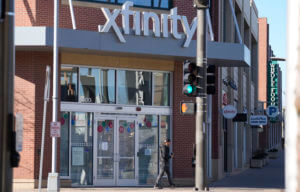 A customer walks away from the closed entrance to an Xfinity store Tuesday, Dec. 28, 2021 in Lakewood, Colo., one of the scenes in a shooting spree that left five people dead—including the suspected shooter Monday evening—and left three more people wounded. The spree spread from the core of Denver to the western suburb of Lakewood where the suspect was shot and killed by police near a busy intersection in a bustling shopping district. (AP Photo/David Zalubowski)

About a minute later, the Lakewood police officer saw McLeod and ordered him to drop his weapon. She was shot in the abdomen but fired back at him, Romero said.

The wounded officer, whose name has not been released, underwent surgery Monday night. She is expected to make a full recovery.

Family members identified one of the other victims Tuesday as Alicia Cardenas, 44, the owner of the Sol Tribe tattoo shop, where the first shooting happened.

Alfredo Cardenas told KMGH-TV that his only daughter owned her first tattoo shop when she was 19 and had worked in the Broadway location in Denver for 15 to 20 years.

“Very gregarious, very friendly, but she was a very determined person,” he said. “She knew where she was going.”

Alicia Cardenas is survived by her 12-year-old, Alfredo Cardenas said.

On Tuesday, candles, flower bouquets and some containers of fruit rested in the doorway of Cardenas’ shop as people, including her fiance, Daniel Clelland, stopped by to remember a woman they said cared for so many.

“I don’t know why someone would do this,” Clelland said.