SHEPHERDSVILLE, Ky. (AP) — The mother of a 4-year-old girl who was reported missing has been charged with murder after the child’s body was found, Kentucky State Police said.

Catherine McKinney, 21, and her boyfriend Dakota Hill, 26, both of Shepherdsville, were charged with murder and abuse of a corpse, police said Saturday in a statement. 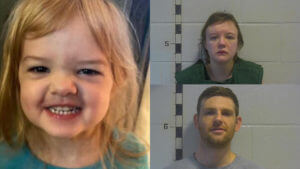 The Shelby County Sheriff’s Office had contacted state police on Feb. 2 requesting assistance with their investigation into the location of Serenity McKinney, who had last been seen by relatives in December 2020, authorities said. The child’s body was found Friday in a wooded area of West Point near the Jefferson-Bullitt County line and was sent for an autopsy, police said.

News outlets reported the girl lived in Shelby County when she was last seen by extended relatives, who reported her missing earlier this year.

McKinney and Hill are being held at the Shelby County jail. Online records don’t indicate whether they have attorneys.