LONDON (AP) — A British police officer was convicted Wednesday of manslaughter in the death of Dalian Atkinson, a former professional soccer player who died after being Tasered and kicked in the head.

A jury unanimously found Constable Benjamin Monk guilty of manslaughter but cleared him of murder. 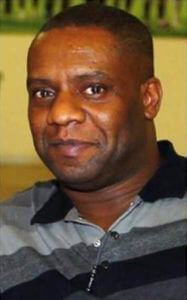 This undated photo shows Dalian Atkinson, issued by Karen Wright, his partner. A British police officer was convicted Wednesday June 23, 2021, of manslaughter in the death of Dalian Atkinson, a former professional soccer player who died after being Tasered and kicked in the head. (Courtesy of Karen Wright via AP)

Former Aston Villa star Atkinson, 48, died in August 2016 after police were called to his father’s home in Telford, central England. He went into cardiac arrest on the way to a hospital and died around an hour after officers used a Taser to subdue him. Prosecutors said Monk used a stun gun for 33 seconds against Atkinson — more than six times longer than was standard.

Monk, 43, said he had been afraid for his life after Atkinson, who appeared to be having a mental health crisis, made threats and smashed a glass door pane. He claimed he acted in lawful self defense, first using a stun gun eight times and then aiming kicks at the athlete’s shoulder. His boot hit Atkinson at least twice in the head.

The officer was charged after a three-year inquiry and convicted after a six-week trial. Atkinson’s family members criticized the length of time it had taken to bring the case to court, but said they were “hugely relieved that the whole country now knows the truth about how Dalian died.”

“On the night he died, Dalian was vulnerable and unwell and needed medical attention,” the family said in a statement. “He instead received violence, and died with PC Monk’s boot lace prints bruised onto his forehead.”

Jurors at Birmingham Crown Court are still deliberating on an assault charge against another police officer who was Monk’s girlfriend at the time.

It is extremely rare for police in Britain to be convicted of manslaughter or murder over deaths in custody or during contact with the public. According to the charity Inquest, which looks at deaths involving the state, the last such conviction was in 1986.

Atkinson was a forward who played in England’s top division for Sheffield Wednesday and Aston Villa. During a Villa game against Wimbledon in October 1992 he scored one of the Premier League’s most famous goals when he ran from inside his own half, evaded a number of challenges, then chipped the ball over the goalkeeper.

He scored 20 Premier League goals for Villa and also netted in the 1994 League Cup final in the team’s 3-1 win over Manchester United. Atkinson also had spells with Real Sociedad in Spain, Fenerbahce in Turkey and in South Korea.