BRISTOL, Conn. (AP) — Two police officers who were shot dead in Connecticut were apparently drawn into an ambush by an emergency call about possible domestic violence, authorities said Thursday. A third officer was wounded in the gunfire.

State police said in a release that the 911 call Wednesday night about a dispute between two siblings appears to have been “a deliberate act to lure law enforcement to the scene” in Bristol.

This combo of images provided by the Connecticut State Police, show, from left, Bristol, Conn. Police Department Sgt. Dustin Demonte, Officer Alex Hamzy and Officer Alec Iurato. Authorities said Thursday, Oct. 13, 2022, they believe that police officers Demonte and Hamzy, who were shot dead in Connecticut, had been drawn into an ambush by a 911 call about possible domestic violence. A third officer, Alec Iurato, was wounded but expected to recover. (Connecticut State Police via AP)

Police said suspect Nicholas Brutcher, 35, was shot dead, and brother Nathan Brutcher was wounded. The surviving brother, 32, was hospitalized, and it wasn’t immediately clear whether he or his family have an attorney or someone else who can speak for them.

The deadly encounter came during a week when at least 11 police officers have been shot around the country.

Nationwide, 54 officers have died by gunfire on the job so far this year, compared to 62 throughout 2021, according to the Officer Down Memorial Page, a nonprofit organization that tracks U.S. police officer deaths. (This year’s overall number is far behind last year’s pace, largely due to declining deaths from COVID-19.)

Connecticut state police said they were still working to answer many questions that remained about the confrontation. No video of it has emerged publicly.

Neighbors said they heard two or three sets of gunshots, about 30 in all. 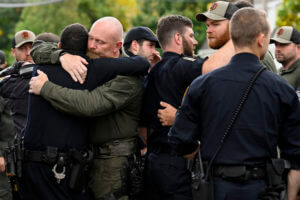 Bristol Police officers console one another at the scene where two police officers killed, Thursday, Oct. 13, 2022, in Bristol, Conn. The officers were fatally shot and a third wounded while responding to a domestic violence call in Connecticut, authorities said Thursday, amid an exceptionally violent week for officers across the country. (AP Photo/Jessica Hill)

“I heard a whole war going on behind me,” said Danny Rodriguez, who said he was outside his home across the street when the gunfire rang out. It was so intense that he could smell gunpowder in the air, he said.

“It was so loud and crazy,” said Rodriguez, who also recalled a woman screaming, “you … killed them!”

State Police Sgt. Christine Jeltema said that when officers answered the call at roughly 10:30 p.m., they encountered someone outside the house, and shots were fired.

Schalitda Strong lives diagonally across the street from the shooting but ducked into her room “because it sounded so close,” she said. Strong said she called 911, but police were already on their way.

Police haven’t yet said who opened fire, who fired the fatal shots, or how many guns were fired in all.

“We lost two exceptional Bristol police officers, and a third was seriously injured, as a result of senseless violence,” Bristol Police Chief Brian Gould said at a news conference. 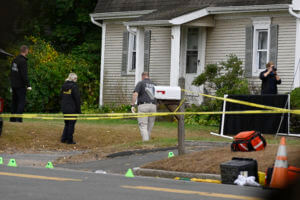 Police investigate the scene where two police officers killed, Thursday, Oct. 13, 2022, in Bristol, Conn. The officers were fatally shot and a third wounded while responding to a domestic violence call in Connecticut, authorities said Thursday, amid an exceptionally violent week for officers across the country. (AP Photo/Jessica Hill)

Demonte, 35, was a 10-year veteran officer and co-recipient of his department’s 2019 Officer of the Year award.

He was “very focused on his career and furthering his career and education,” the chief said. Demonte, who earned a bachelor’s degree in criminology, worked as a school resource officer. He and his wife were expecting their third child, Gould said.

Philip Demonte Jr. called his brother “an all-around good guy” with a great sense of humor.

“No one had anything bad to say” about him, his brother said. “Terrible loss, someone who died for no reason.”

Hamzy, 34, had gotten many letters of commendation during his eight years on his hometown police force, the chief said. Like Demonte, Hamzy was an advisor to a police cadet program.

“The outpouring of love, support and prayers from so many is deeply appreciated,” Hamzy’s family said in a statement.

Scores of officers lined a street and followed a vehicle carrying Hamzy’s body from the shooting scene late Thursday morning. Demonte died at a hospital.

Iurato, 26, joined the Bristol department in 2018 and has a bachelor’s degree in government, law and national security, the chief said. Iurato was released from a hospital Thursday morning.

Bristol, about 15 miles (24 kilometers) southwest of the state capital of Hartford, is home to about 60,000 people and to the sports network ESPN.

Connecticut Gov. Ned Lamont called the shooting “a senseless tragedy,” ordering flags to be lowered to half-staff in the officers’ honor.

It followed shootings of police officers this week in Greenville, Mississippi; Decatur, Illinois; Philadelphia,Las Vegas and central Florida. Two of those officers, one in Greenville and one Las Vegas, were killed.

The last fatal shooting of a Connecticut officer was in 2018, when Preston Constable William Kinney was gunned down while serving an eviction notice, according to the Connecticut Law Enforcement Memorial Foundation. 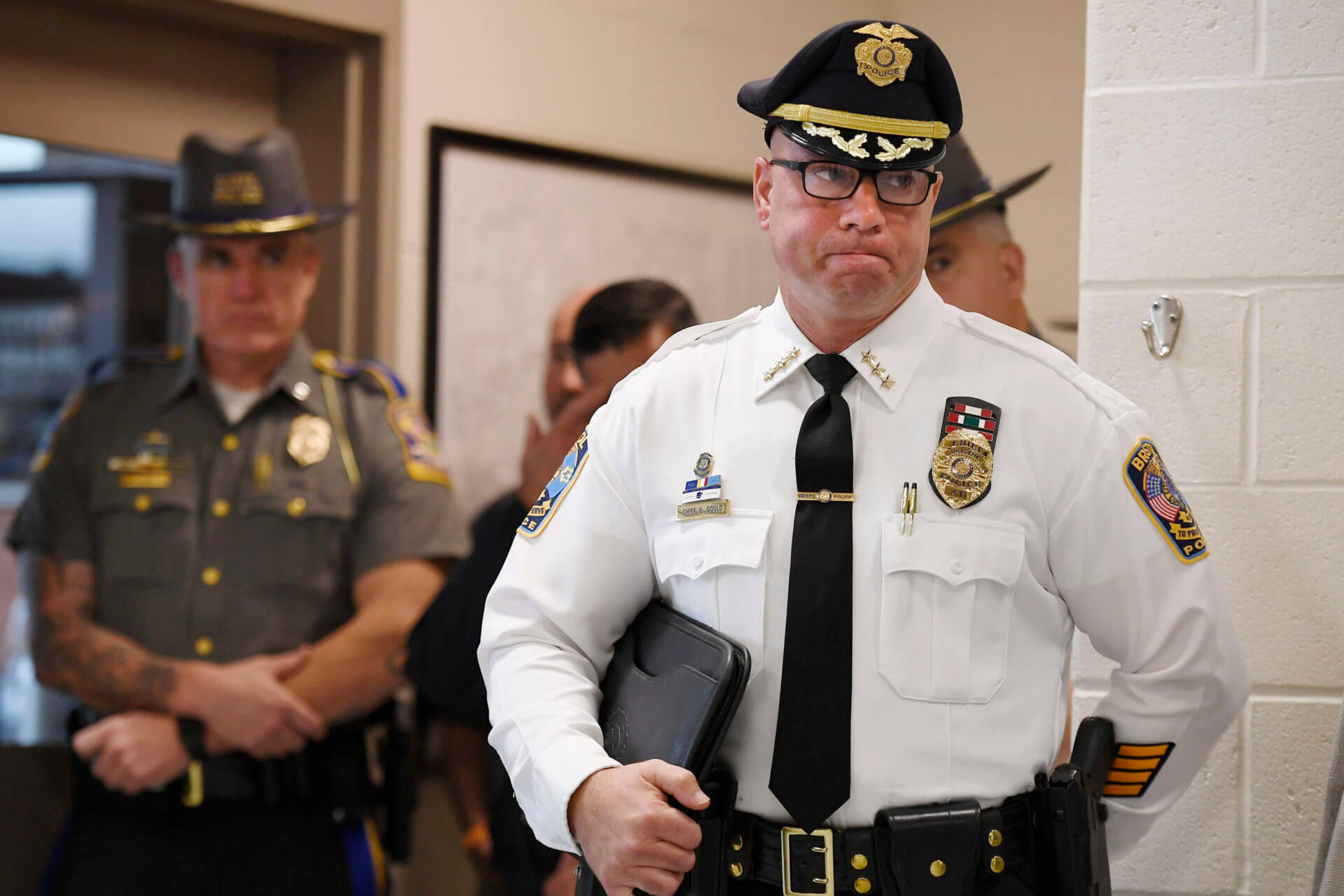