MINNEAPOLIS (AP) — Former Officer Derek Chauvin underwent training in 2016 and 2018 on how to defuse tense situations with people in crisis and how police must use the least amount of force necessary to get someone to comply, the jury at Chauvin’s murder trial was told Tuesday.

Sgt. Ker Yang, the Minneapolis police official in charge of crisis-intervention training, and use-of-force instructor Lt. Johnny Mercil became the latest department members to testify as part of an effort by prosecutors to demolish the argument that Chauvin was doing what he was trained to do when he put his knee on George Floyd’s neck last May.

Yang said officers are taught to make critical decisions in dealing with people in crisis, including those suffering mental problems or the effects of drug use, and then de-escalate the situation. Prosecutor Steve Schleicher said records show that Chauvin attended a 40-hour course on the method in 2016.

“When we talk about fast-evolving situations … a lot of the time we have the time to slow things down and reevaluate and reassess and go through this model,” Yang said.

Records also show that Chauvin took in-service training in the use of force in October 2018. Mercil said those who attended were taught that the sanctity of life and protection of the public are the cornerstone of the department’s use-of-force policy.

He also said officers were taught that restraint is considered force and that they must use the least force required because “it’s safer and better for everybody involved.”

Schleicher showed a still image taken from bystander video of Chauvin with his knee on Floyd’s neck — one that jurors have seen several times — and asked Mercil: “Is this a use of force?” 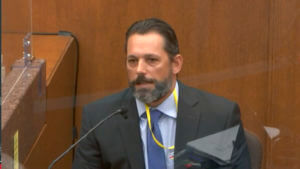 In this image from video, Minneapolis Police Lt. Johnny Mercil, a use of force trainer, testifies as Hennepin County Judge Peter Cahill presides Tuesday, April 6, 2021, in the trial of former Minneapolis police Officer Derek Chauvin at the Hennepin County Courthouse in Minneapolis. Chauvin is charged in the May 25, 2020 death of George Floyd. (Court TV)

Mercil said officers are trained in how to get control of a suspect by using their arms on the side of a person’s neck to slow blood flow to the brain. He said officers are not taught to use their legs or knees, though a knee on the neck can happen depending on a person’s resistance.

Schleicher asked if the neck restraint could be used if the person was under control and handcuffed.

“I would say no,” Mercil said.

He said that if officers are applying handcuffs on someone in a prone position, they are taught to use a knee on the person’s shoulder to isolate the arm.

Chauvin, 45, is charged with murder and manslaughter in Floyd’s death May 25. The 46-year-old Black man was pinned to the pavement outside a neighborhood market after being accused of trying to pass a counterfeit $20 bill for a pack of cigarettes.

Floyd’s treatment by the white officer was captured on widely seen bystander video that sparked protests around the U.S. that descended into violence in some cases.

Floyd, who had taken drugs, frantically struggled with officers who tried to put him in their squad car, saying he was claustrophobic. Prosecutors said Chauvin continued to kneel on Floyd’s neck for 9 minutes, 29 seconds, after he was handcuffed behind his back and lying on his stomach, even though Floyd said 27 times that he could not breathe.

Chauvin’s lawyer, Eric Nelson, has argued that Chauvin “did exactly what he had been trained to do over his 19-year career” and that it was Floyd’s use of illegal drugs and his underlying health conditions — not the officer’s knee — that killed him.

Nelson has further argued that police at the scene were distracted by what they perceived as a growing and increasingly hostile crowd of onlookers.

Under questioning from Nelson, Yang testified that people watching an arrest may also be in crisis and that officers have to take in the situation around them as well.

Instead of protecting a fellow officer in what is sometimes called the “blue wall of silence,” some of the most experienced members of the Minneapolis force – including the police chief and the head of the homicide division — have taken the stand to openly condemn Chauvin’s treatment of Floyd.

On Monday, Police Chief Medaria Arrondondo, who called Floyd’s death “murder” soon after it happened, testified that Chauvin had clearly violated department policy on a number of counts and used excessive force.

Arrondondo said continuing to kneel on Floyd’s neck once he was handcuffed behind his back and lying on his belly was “in no way, shape or form” part of department policy or training, “and it is certainly not part of our ethics or our values.”