MINNEAPOLIS (AP) — A Black man who was fatally shot by Minneapolis police as they were executing a search warrant in a homicide investigation was wrapped in a blanket on a couch when SWAT officers entered the apartment, and displayed a handgun as they shouted at him to show his hands and get on the ground, according to police body camera video.

Police identified the man on Thursday as 22-year-old Amir Locke. The Minneapolis Police Department said in a statement Wednesday that he had pointed a loaded gun “in the direction of officers.” An incident report said he had two wounds in the chest and one in the right wrist.

The body camera video showed the footage at slow speed and then at regular speed. It shows an officer using a key to unlock the door and enter, followed by at least four officers in uniform and protective vests, time-stamped at about 6:48 a.m. As they enter, they repeatedly shout, “Police, search warrant!” They also shout “Hands!” and “Get on the ground!” The video shows an officer kick a sectional sofa, and Locke begins to emerge from under a blanket, holding a pistol. Three shots are heard, and the video ends.

The city also included a still from the video showing Locke holding the gun, his trigger finger laid aside the barrel. The top of Locke’s head is barely visible.

Nekima Levy Armstrong, a civil rights attorney and prominent community activist whom the mayor appointed last year as co-chair on a community safety work group, said Locke’s family told her Locke was a licensed gun owner with a concealed carry permit, that he didn’t live in the apartment, that police had not been looking for him and that he wasn’t one of three suspects named in the warrant.

Interim Chief Amelia Huffman said in a news conference after the video was released that Locke isn’t named in the warrants. She said it isn’t clear how or whether Locke is connected to the homicide investigation, which she said is under the control of the St. Paul Police Department. That agency has released few details so far and the warrants weren’t publicly available Thursday.

Mayor Jacob Frey said the video “raises about as many questions as it does answers” and said the city was pursuing answers “as quickly as possible and in transparent fashion” through investigations including one by the state Bureau of Criminal Apprehension.

Huffman said the officer, identified earlier as Mark Hanneman, was in a difficult position.

“The still shot shows the image of the firearm in the subject’s hands, at the best possible moment when the lighting was fully on him. That’s the moment when the officer had to make a split-second decision to assess the circumstances and to determine whether he felt like there was an articulable threat, that the threat was of imminent harm, great bodily harm or death, and that he needed to take action right then to protect himself and his partners,” she said.

Hanneman was hired in 2015. Records released by the city showed three complaints, all closed without discipline, but gave no details. Data on the website of the citizen group Communities United Against Police Brutality showed a fourth complaint, in 2018, that remains open. No details were given.

Levy Armstrong posted a link to the video on social media “for those who can stomach the murderous conduct of the Minneapolis Police Department.” She added: “The mother in me is furious and sick to my stomach. Amir never had a chance to survive that encounter with police.” 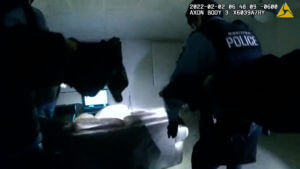 She and other activists angrily confronted the mayor and interim chief at their news conference, with Levy Armstrong calling the city’s release of information “the anatomy of a cover-up.” Another activist blasted the pair for a news release Wednesday that referred to Locke as a “suspect.”

Locke’s mother, Karen Locke, declined to comment to The Associated Press earlier Thursday, referring questions to the family’s attorney, Ben Crump. The civil rights lawyer has won huge settlements for the families of several people killed by police, including $27 million for the family of George Floyd. Crump and the family, who were shown the video before it was publicly released, planned a news conference Friday.

In a statement, Crump compared Locke’s shooting to the botched raid in which officers killed Breonna Taylor in her home in Louisville, Kentucky, in 2020, which led to calls for change nationwide.

“Like the case of Breonna Taylor, the tragic killing of Amir Locke shows a pattern of no-knock warrants having deadly consequences for Black Americans. This is yet another example of why we need to put an end to these kinds of search warrants so that one day, Black Americans will be able to sleep safely in their beds at night,” Crump said.

Huffman said that the city had both knock and no-knock warrants.

Several state lawmakers from Minneapolis had joined Levy Armstrong and others in calling for body camera footage to be made public. In a letter to Huffman and Frey, they insisted that “one path to establishing trust between the police department and the community is greater transparency and accountability of police actions.”

The city released some reports and photographs of the gun recovered from the scene on its website Wednesday.

In December 2020, after an officer shot Dolal Idd at a gas station on Minneapolis’ south side, the city released video the next day, saying it showed that the man had fired at officers first. And last April, police in suburban Brooklyn Center released video the day after the shooting of Daunte Wright, saying it showed that Officer Kim Potter apparently intended to use her Taser but drew her gun by accident. Potter was convicted of manslaughter in December.