BLAIRSTOWN, N.J. (AP) — A girl who was dubbed Princess Doe after her remains were found 40 years ago in a New Jersey cemetery has been identified as a Long Island teenager, authorities announced Friday. 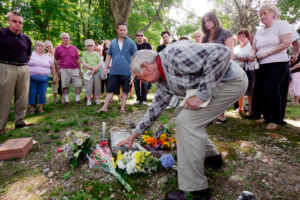 FILE — Howard Mott reaches for Princess Doe’s gravestone during a memorial service at Cedar Ridge Cemetery in Blairstown, N.J., July 15, 2007. The remains of a girl who was dubbed “Princess Doe” after she was found 40 years ago in a northwestern New Jersey cemetery have been identified as a Long Island teenager, authorities announced Friday, July 15, 2022. (Claudio Papapietro/The New Jersey Herald via AP, File)

Kinlaw tried to lure Olanick into prostitution and killed her after she refused, authorities said, according to Lehigh Valley Live. Her remains were found July 25, 1982, in Cedar Ridge Cemetery in Blairstown, in northwestern New Jersey near the Pennsylvania border. Authorities have said she was beaten beyond recognition.

Residents of the area gave her a burial, and she became known as Princess Doe, a name given to her by investigators who sought to identify her. Her burial site contains a gravestone that reads: “Princess Doe. Missing from home. Dead among strangers. Remembered by all.”

Information about a lawyer who could speak on Kinlaw’s behalf about the new charges wasn’t immediately available.

“For 40 years, law enforcement has not given up on Princess Doe,” Warren County Prosecutor James Pfeiffer said Friday during a news conference with New Jersey State Police and other law enforcement and assisting agencies.

Kinlaw confessed to the Princess Doe slaying in written statements dating to 2005, authorities revealed Friday. But the prosecutor said that determining the victim’s identity was crucial to assembling a solid case.